The terrorist who carried out yesterday's fatal stabbing in Bourke Street, Hassan Khalif Shire Ali, had his passport cancelled due to fears he planned to travel to Syria in 2015, the Australian Federal Police say. 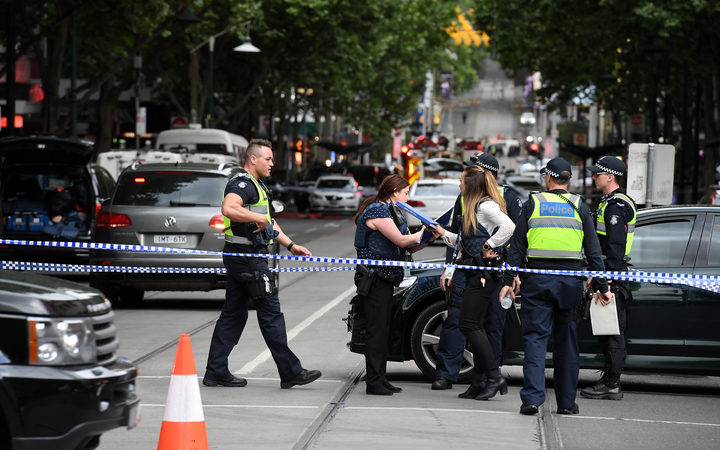 The revelation comes after Victoria Police raided properties in Melbourne's north and west following yesterday's terrorism attack in central Melbourne, in which Shire Ali was shot dead after taking the life of another man.

The Somali-born Shir Ali, aged 30, crashed his car loaded with gas bottles in the Melbourne CBD and stabbed three people before he was shot by police and died in hospital.

The ABC understands he is also known as Hassan Ali and Hassan Khalif, and recently moved from his family's Werribee home because of problems with substance abuse.

His family is well-known and respected within the Somali community in the region, and attended the Virgin Mary Mosque in Hoppers Crossing.

It is believed Shire Ali most commonly attended prayer in Melbourne's northern suburbs.

Shire Ali is understood to have previously been investigated for his association with others linked to terrorism.

Police said in a statement that investigators had executed search warrants at two addresses in Werribee and Meadows Heights.

One man, a 74-year-old restaurant worker in Melbourne's CBD who police have not yet named, died at the scene after being stabbed.

A 26-year-old man and a 58-year-old man are both in a stable condition in the Royal Melbourne Hospital following surgery for lacerations.

Authorities said there would be an increased police presence around the Melbourne CBD and at major events in the coming days so the public could feel comfortable going about their business, but they did not believe there was an ongoing threat.

Islamic State (IS claimed responsibility for the attack) and police confirmed this morning that Shire Ali was "inspired" and "radicalised" by IS.

Police are treating the attack as terror-related at this stage, and counter-terrorism investigations are continuing into Hassan Khalif Shire Ali's background.

Mr Ashton said he believed the suspect moved to Australia from Somalia in 1990s, and that his family members have been known to police on terrorism-related matters.

Yesterday's incident unfolded at about 4.10pm when emergency services were called to a car fire in Bourke Street.

The area was crowded with pedestrians who described hearing explosions and seeing a man stabbing others before lunging at police with a knife.

Police shot the man who was taken to hospital in a critical condition but later died.

In a statement, police said: "The man was known to Victoria Police and federal intelligence authorities by way of his family associations".

Mr Ashton said the man's relatives were "persons of interest" and that he had been known to police and federal intelligence authorities.

He said there would be a strong police presence in the city.

Mr Ashton said there was "no ongoing threat at the moment" to people attending public events this weekend.

"We have a number of events going on in Melbourne, Stakes day at Flemington, soccer at AAMI stadium and also Remembrance Day so we are doing security reassessments in light of those events.

"At this stage we are encouraging people to go to those events and there will be additional police over the weekend."

Victorian Premier Daniel Andrews strongly condemned yesterday's attack and thanked police as well as bystanders who courageously stepped in to try to help.

"This is an evil and terrifying thing that has happened in our city and state today and we condemn it," the Mr Andrews said.

"But we also thank the police who did us proud in very dangerous circumstances.

"We thank our police, we thank those who came to assist them in the protection of other members of the public."

"I'll never accept that violent extremism should be a way of life for a big city like Melbourne.

"All the resources of our state should be directed towards keeping Victorians safe. Victorians would say we do not have to live like this."

In a statement, Prime Minister Scott Morrison said he condemned the act of terrorism in Melbourne, describing it as an "evil and cowardly attack".

He said he had been briefed by law enforcement and security agencies and acknowledged the investigation by the Joint Counter Terrorism Team, led by Victoria Police.

"Australians will never be intimidated by these appalling attacks and we will continue to go about our lives and enjoy the freedoms that the terrorists detest," he said.

Members of the public are asked to avoid the area on Bourke Street between Russell and Swanston Streets.

Police have asked the public to submit any images or video footage of the attack to help them with their investigation.

Authorities said it was normal for people to have strong emotional or physical reactions after such a distressing or frightening event, and people should seek help from their doctor or by calling a helpline if they needed support.

Melbourne's Lord Mayor Sally Capp sought to reassure the public and praised the police for their swift response.

"Our thoughts are with everybody affected, including family and friends.

"It is at times like this when we need to be incredibly supportive and empathetic of all Melbournians because we will respond to this in different ways, and I hope that we can pull together as a community to really support each other."

Trauma specialist, Rob Gordon, urged the Melbourne community to learn from the incident and be aware of dangers, but to also not let fear dictate.

"We need to understand and become familiar with risks and hazards.

"It's very important to recognise that we live with all sorts of hazards but we do it successfully by being aware and understanding and careful.

"Fear doesn't help you get more prepared - it makes you jump at shadows and then you tend to get overwhelmed or exhausted and then you shut off."