Germany's Angela Merkel has said she will step down as chancellor in 2021 following recent election setbacks. 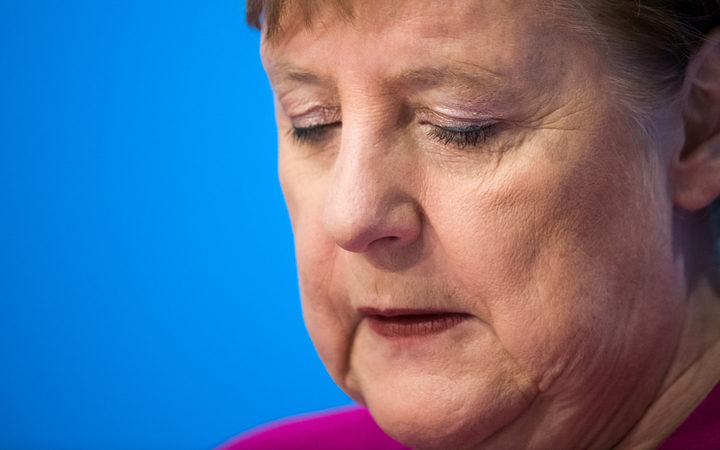 Angela Merkel has always insisted that if she is to lead Germany, she must also lead her party. Photo: AFP

"I will not be seeking any political post after my term ends," she told a news conference in Berlin.

She also said she would not seek re-election as leader of the centre-right CDU party in December. She has held the post since 2000.

The CDU was severely weakened in Sunday's poll in the state of Hesse, the latest in a series of setbacks.

Both the CDU and its national coalition partners, the Social Democrats, were 10 percentage points down on the previous poll there.

Parties like the left-leaning Greens and the far-right, anti-immigration AfD have grown in national support following the 2017 general election, as backing for the major centre parties has waned.

"As chancellor and leader of the CDU I'm politically responsible for everything, for successes and for failures," she said.

"The time has come to open a new chapter."

She also made it clear she would not handpick her successor as party leader and would "accept any democratic decision taken by my party".

Annegret Kramp-Karrenbauer would be the obvious choice for Merkel loyalists to replace her. She is currently the party secretary.

However, Health Minister Jens Spahn, a leading critic of the chancellor's open-door migration policies, has also announced his candidacy.

And Friedrich Merz, a former leader of the CDU-CSU parliamentary group and an old rival to Mrs Merkel, has thrown his hat into the ring.

Mrs Merkel's CDU plunged 11 percentage points to 27 percent in yesterday's elections in the central state of Hesse, according to preliminary results. This was the party's worst showing in the state since 1966.

The SPD, which is in coalition with the CDU nationally, fell by a similar amount to 19.8 percent.

The main beneficiaries were the Greens, who paradoxically share power with the CDU in the state and have now drawn level with the SPD, and the far-right AfD, who rose to 13 percent.

The Hesse vote follows a pattern of losses for the two main parties, with the AfD doing particularly well in eastern states.

Also on 14 October, the CDU's Bavarian ally, the CSU, lost its absolute majority in the state's parliament which it has dominated since 1957. Like in Hesse, the SPD also lost badly and the Greens and AfD surged.

While the Greens appear to have benefited from the SPD's slump in support, it seems clear that the centre-right has lost voters to the AfD.

Part of the reason could be anger at Mrs Merkel's decision to open Germany's borders to large numbers of migrants, a move which the AfD has vehemently opposed.