The helicopter belonging to the owner of the Leicester City football team has crashed in a car park outside the club's ground shortly after taking off following a match in Britain. 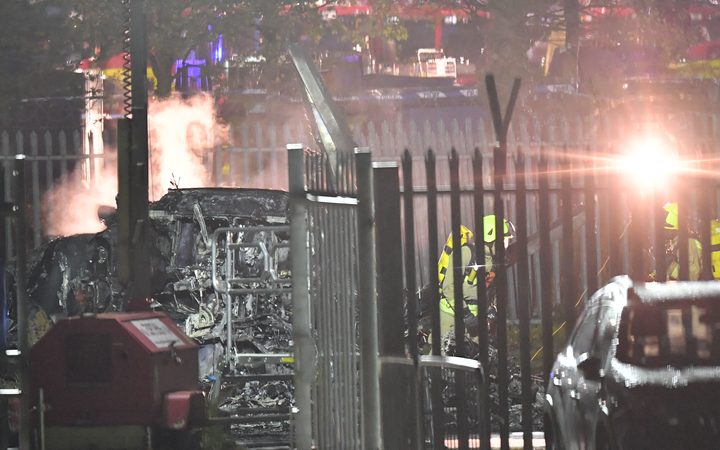 Emergency services work at the scene on the wreckage of a helicopter that crashed in a car park outside Leicester City Football Club's King Power Stadium in Leicester, England. Photo: AFP

It is not known if Thai national Vichai Srivaddhanaprabha was in the helicopter at the time.

Leicester City had been playing West Ham United in the Premier League at their King Power stadium.

Pictures from the ground showed a large fire in the car park, which has since been put out.

Under Mr Srivaddhanaprabha's ownership, Leicester City won the Premier League in 2016, having started the season as 5,000/1 outsiders.

The game, which ended 1-1, finished about one hour before the helicopter took off.

A Leicestershire Police spokesman said emergency services were dealing with an incident "after an aircraft came down in a car park behind the ground".

Leicester City said the club was assisting police and emergency services and would issue a more detailed statement in due course.

A spokesman for East Midlands Ambulance Service said they received a call at 20:38 local time to reports of the helicopter crash.

The service has advised members of the public to stay away from the area.

A University Hospitals of Leicester spokesman tweeted to say they were aware of the incident and supporting emergency services.

BBC football commentator Ian Stringer said the helicopter was "spiralling", and that eyewitnesses said it "came down like a stone".

He said: "I've seen the backroom staff of the first team in tears, the reception area is silent with people just crying."

Sky Sports News reporter Rob Dorsett said the helicopter took off from the pitch, as it did after every game.

He said that after a few seconds it appeared to lose control and crashed into the car park just a few hundred metres away.

One witness said it appeared "the tail propeller wasn't working, putting it into a spin".

Freelance photographer Ryan Brown was covering the game and saw the helicopter clear the King Power stadium before it crashed.

He told BBC Radio 5 live: "Literally the engine stopped and I turned around, and it made a bit of a whirring noise.

"It turned silent, blades started spinning and then there was a big bang."

He said when he ran to the scene "there was a huge fireball" and it looked like the helicopter had crashed in an industrial park next to the stadium.

Leicester mayor Peter Soulsby tweeted that his thoughts and prayers were "with all - particularly owners who've done so much for club and our city".

Labour MP Jon Ashworth, who represents Leicester South, said he had been in touch with emergency services and thanked them for responding so quickly.

Several Leicester City players, including striker Jamie Vardy, and West Ham have tweeted since the crash.