An investigation is underway to find out what caused a train crash that has left 18 people dead and more than 170 injured in northern Taiwan. 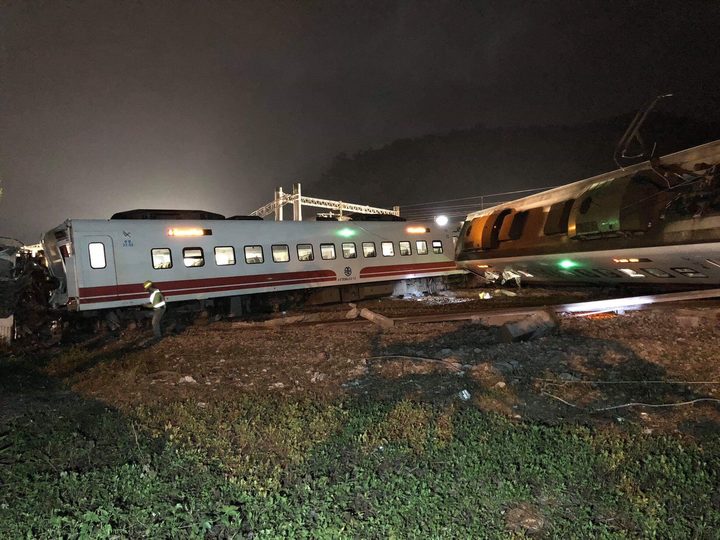 The Taiwan Railways administration is investigating a train derailment in Yilan County near the coast on a line popular among tourists.

The Puyuma Express 6432 service reportedly came off the tracks close to Xinma station, near the town of Su'ao about 70km from Taipei.

Four carriages overturned in the crash when all eight cars ran off the tracks on a bend.

All 366 passengers onboard - including the dead and injured - had been evacuated or removed from the wreckage, the Taiwan Railways Administration said.

A passenger onboard one of the overturned carriages, 30-year-old Henry Tseng, suffered eye injuries.

"The train was going very fast. I thought to myself: Why was it not slowing down on a curve?" he told Reuters.

"I hit a wall when the car started to flip. Around five to six people were thrown out of the carriage door...There's no time to think what happened. Everyone was in a rush to get out," he added.

Hundreds of rescuers and military personnel worked through the wreckage with spotlights on Sunday night in search of survivors, with ambulances stationed nearby.

Rescue workers, some attending to injured people at the scene, used cranes to lift the battered cars, some of which were lined in a zigzag pattern near the tracks.

The official Central News Agency said the incident was the island's deadliest rail tragedy since 30 people were killed in a 1981 collision in northern Taiwan.

"It's terrifying. I really did not know how it happened. After a scene of terror, the train flipped, the seats were broken and suitcases were all over the place," a seventh-grader with the surname Yang told the news agency.

The deputy chief of the Taiwan Railways Administration, Lu Chieh-shen, told a news conference on Sunday that the train was only six years old and had been in "pretty good condition" before the accident.

It is not immediately clear what caused the train to derail, but witnesses told local media they heard a loud noise then sparks and smoke.

Witnesses reported having to break windows to escape the carriages and dozens of injured have been transported to local hospitals.