At least 10 people have been killed by flash floods in the Aude region of south-western France. 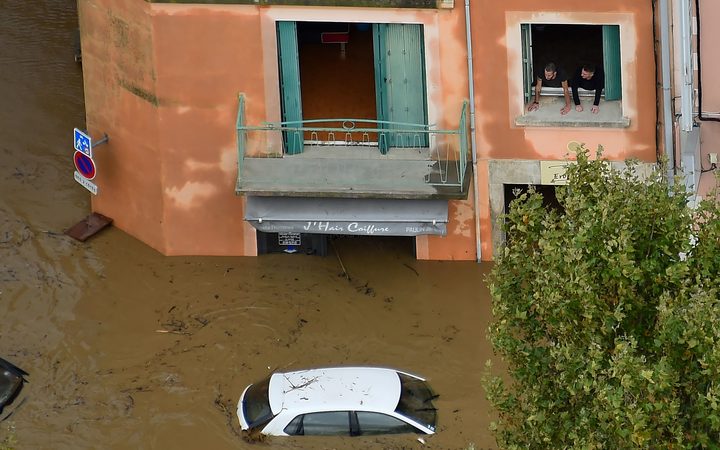 An aerial view taken on October 15, 2018 shows a flooded street in the city of Trèbes Photo: AFP

A nun was swept away by the River Aude, local broadcaster BFMTV reports.

Separately, a policewoman attending to a weather-related traffic accident in the town of Albi was hit and killed by a motorist.

The death toll has been revised down from 13, France's interior ministry explained, because of an error which meant some of the dead had been counted twice.

Alain Thirion, the prefect of Aude, said people were stranded on rooftops and would have to be evacuated by air because it was too dangerous by boat.

One person was injured, he added, when a house collapsed in the locality of Cuxac.

The floods are the worst the Aude river has seen in more than 100 years, according to the weather monitoring service Vigicrues.

Seven helicopters and 700 emergency service workers have been deployed, according to France's Prime Minister Édouard Philippe, who has also visited the area.

An angry resident of Villegailhenc told the prime minister there had been a lack of public information, including from the media, when flooding hit in the early hours.

People on social media have also been sharing photos showing the extent of the damage to homes and streets in the area.

The BBC reported heavy rain in the region was not uncommon at this time of year, but it had been exacerbated by growing numbers of homes being built on flood plains.

Residents of the worst-hit areas have been urged to stay inside their homes by emergency services and local authorities, who have issued a red alert. 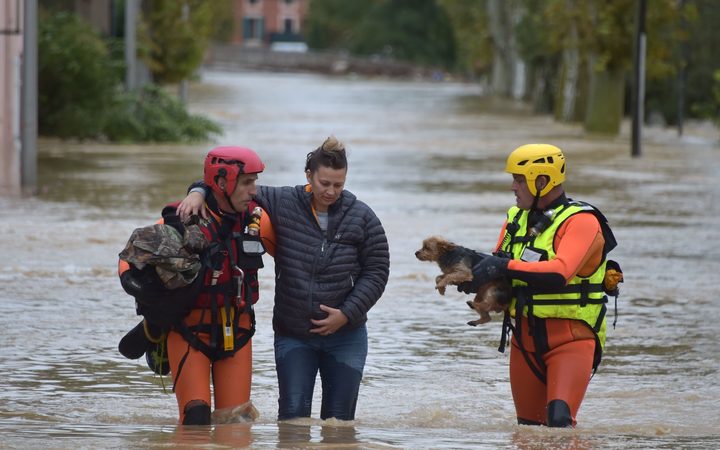 Firefighters helps a resident with a dog Photo: AFP

In Trèbes, floodwater is as high as seven metres (23ft), local authorities say. Footage from the early hours of Monday shows the rising waters.

All roads are inaccessible to the north of Carcassonne municipality and schools are shut, authorities say.

A bridge was torn down and carried away by the force of the water in Villegailhenc.

An amber warning for flooding has also been issued for the nearby regions of Aveyron, Haute-Garonne, Hérault, Pyrénées-Orientales and Tarn.

The region is popular with tourists, many of whom are drawn to the medieval hilltop city of Carcassonne.