US First Lady Melania Trump has said she started her anti-cyberbullying campaign because she is "the most bullied person on the world". 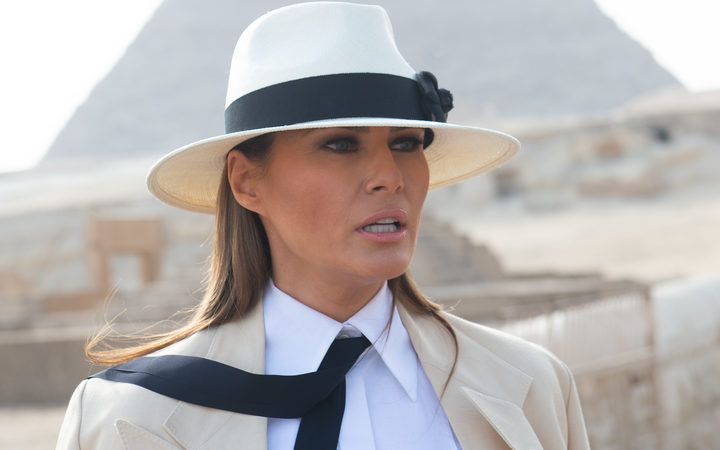 US First Lady Melania Trump tours the Egyptian pyramids and Sphinx in Giza, Egypt, the final stop on her 4-country tour through Africa. Photo: AFP

In a wide-ranging interview with ABC News, she also said she does not trust some people who have worked in the West Wing.

And she said that women who allege sexual abuse must produce "really hard evidence".

The interview was recorded on her trip last week across four African nations.

"I could say that I'm the most bullied person on the world," the first lady said.

"You're really the most bullied person in the world?" asked presenter Tom Llamas.

"One of them - if you really see what people are saying about me," Mrs Trump said in the interview, which was recorded last week in Kenya and airs in full on Friday.

EXCLUSIVE: First lady Melania Trump says her “Be Best” policy platform targeting online bullies is personal. “I could say that I’m the most bullied person in the world,” she tells ABC. https://t.co/iiEv5Z3ijv pic.twitter.com/CWZ7g9by27

Mrs Trump was also asked if she is Mr Trump's gatekeeper.

She said she does not trust some people who have worked in the West Wing, and that she has given Mr Trump her "honest advice" about them.

"Well, some people they don't work there anymore," she said, when asked what action Mr Trump had taken.

"It's harder to govern," she said. "You always need to watch your back."

In the ABC interview she also said women alleging they have been sexually abused "need to have really hard evidence".

She did not clarify what would constitute "hard evidence".

"I do stand with women but we need to show the evidence," she said.

"You cannot just say to somebody, 'I was sexually assaulted,' or, 'You did that to me'.

"Because sometimes the media goes too far and the way they portray some stories [that are] not correct. It's not right," she added.

His nomination was almost derailed by an allegation that as a high school teenager he sexually abused a girl.