South Africa's finance minister Nhlanhla Nene has quit after admitting meeting members of the Gupta family, who have been accused of corruption. 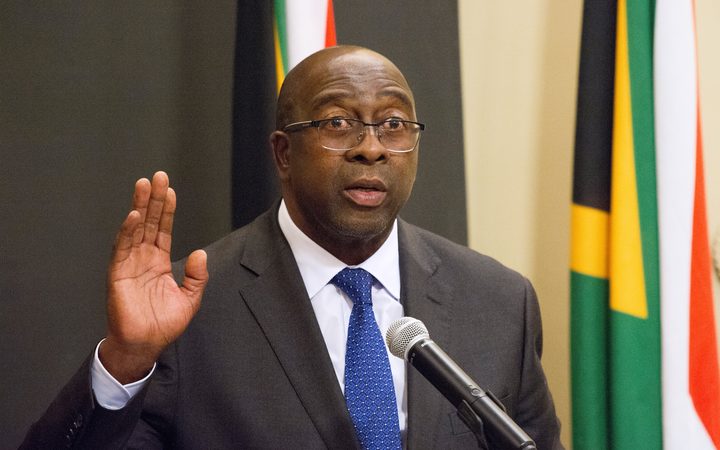 President Cyril Ramaphosa said he accepted the resignation "in the interests of good governance".

The Guptas have been accused of working with former President Jacob Zuma to secure government contracts and determine cabinet appointments.

Both the Guptas and Mr Zuma deny the allegations.

Mr Nene has been replaced by former central bank chief Tito Mboweni. This is the fifth change of finance minister since 2014.

Last week, Mr Nene told a judge-led inquiry into the alleged influence of the Guptas, known as the Zondo commission, about meetings that he had previously denied.

There is no suggestion that he had done anything illegal in meeting the businessmen during his stint as deputy finance minister and finance minister in Mr Zuma's government, but he has been under intense political pressure to step down since making the admission.

Mr Zuma sacked him as finance minister in 2015, but he was reappointed by the current president in February.

Rumours of his intended resignation on Monday led to a fall in the value of South Africa's currency, the rand, but it has since recovered its value.

Mr Nene met the Guptas at their businesses and home at least six times between 2009 and 2014.

On the face of it a finance minister talking to top business people may seem normal, but the Guptas have been accused of using meetings, in their residence in a posh suburb of Johannesburg, to influence political decisions.

Former Deputy Finance Minister Mcebisi Jonas has told the Zondo commission that in 2015 he had been offered 600m rand ($NZ63m) if he accepted the post of finance minister at a meeting at the Johannesburg mansion. The Guptas denied the allegation.

After revealing the details of his own meetings, Mr Nene issued a public apology saying: "I am human too, I do make mistakes, including those of poor judgement."

Mr Ramaphosa, who became president in February, brought Mr Nene back into the cabinet in order to restore confidence in the reputation of the country's economic management.

It had received a battering under Mr Zuma's presidency.

In his speech accepting the resignation, Mr Ramaphosa said that Mr Nene had "defended the cause of proper financial management and clean governance".

But he had accepted the resignation because Mr Nene feared his testimony "detracted from the important task of serving the people of South Africa as we work to re-establish public trust in government", Mr Ramaphosa said.