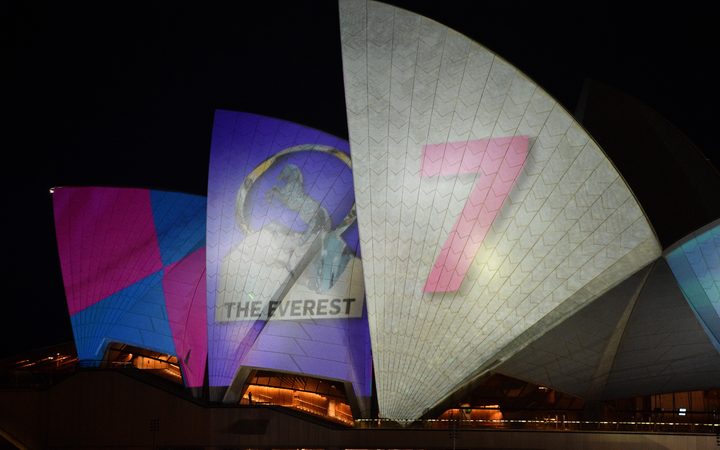 The Sydney Opera House was lit up with a controversial advertisement for a major horse race on October 9, despite days of fierce public backlash over the commercialisation of the iconic landmark. Photo: AFP

Since the NSW Government directed the Opera House to allow the promotional material on racing to be projected, the backlash over the decision has reached a boiling point.

The original plan by Racing NSW was to hold a live barrier draw and project the results onto the Opera House facade, alongside the jockeys' colours, barrier results and The Everest logo.

When the Opera House sails were finally illuminated after days of national backlash, the crowds of protesters began booing and sending up helium balloons.

They then shone bright lights onto the barrier draw results and from across the other side of Circular Quay, the numbers of the race horses displayed on the heritage building were obscured.

Sydney-based lighting company ALIA posted photos of their involvement with the protests showing the same lighting equipment used in music festivals projecting onto the sails.

Protester Joshua Richardson, 19, said he had no problem with the Opera House being lit up in the "right context" but said this illumination was "horrible".

"The Wallabies or Vivid, they aren't advertising gambling, which is detrimental to so many families," Mr Richardson said.

"It's completely wrong to have one of our national landmarks used as a billboard. It's nationally embarrassing."

In a dramatic turn yesterday, Racing NSW suspended all betting for the $13 million race from noon and announced the barrier draw would be conducted in confidence. 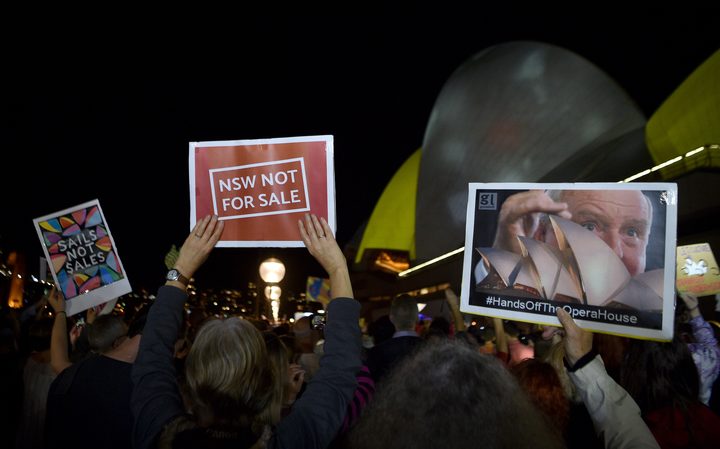 Protesters hold up signs outside the Sydney Opera House as it is lit up with advertising for the upcoming Everest Cup horse race. Photo: AFP

An online petition against the event, now signed by more than 290,000 people, was delivered to State Parliament on Tuesday morning but the petition's organiser, Mike Woodcock, said Premier Gladys Berejiklian did not accept it.

On Tuesday afternoon the Heritage Council of New South Wales delivered a damning letter directly to the Premier expressing its "extreme disappointment" with her decision to allow the advertising to go ahead.

In the letter, Heritage Council chair Stephen Davies said the decision goes against existing management policy and may impact the UNESCO expectation for World Heritage sites.

"It is the view of the Heritage Council that the use of the Opera House for the commercial advertising of this event is completely unsatisfactory and is an inappropriate use of this significant heritage place that is valued by many around the world," he said.

In another letter sent to Greens MP David Shoebridge, Mr Davies said he was unable to issue a Stop Work Order because the planned projections by Racing NSW did not meet the legal definition of "harm" as there was no physical damage being done to the site.

State and federal politicians have weighed in on the stoush, including Prime Minister Scott Morrison, who believed the promotion of the event was a "no-brainer".