France has opened an investigation into the disappearance of Meng Hongwei, the Chinese head of the international police agency Interpol. 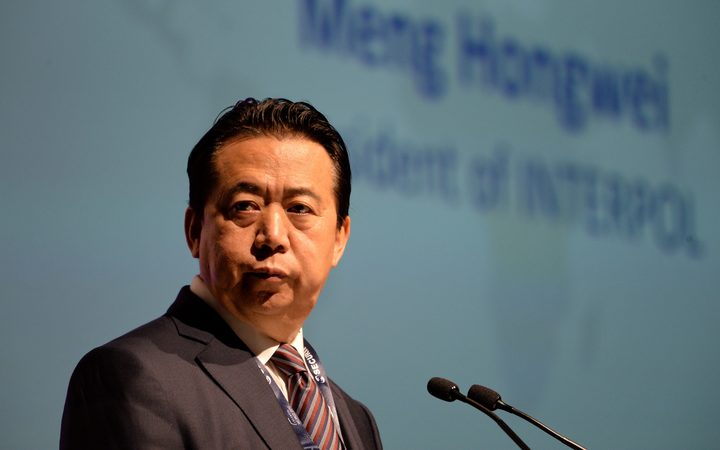 His family have not heard from him since he left Interpol HQ in the French city of Lyon for a trip back to China on 25 September, officials said.

"He did not disappear in France," a source close to the inquiry told AFP.

The South China Morning Post quotes a source as saying Mr Meng, 64, was "taken away" for questioning in China.

It is not clear why he was being investigated by "discipline authorities" or where he was being held, the Hong Kong-based newspaper adds.

Officials in China have so far made no public comments on Mr Meng, a senior Communist Party official there.

What is the French investigation looking at?

It was opened after Mr Meng's wife went to police to report her husband missing.

She was initially quoted by police sources as saying she had not heard from him since his departure on 29 September.

But the French interior ministry later said the correct date was 25 September.

"France is puzzled about the situation of Interpol's president and concerned about the threats made to his wife."

It did not provide any further details.

The official in question suddenly drops out of the public eye and an alarm is raised that the person is "missing", usually by members of the public, she said.

Eventually, the party issues a terse statement that the official is "under investigation", the official is then booted from the party for "disciplinary infractions" and - eventually - a prison sentence is announced. She said since Xi Jinping came to power in 2012, well over a million party officials have been disciplined in some way.

Celia Hatton said Mr Hongwei's case was notable in that his wife notified the French authorities. She said family members of missing party officials rarely, if ever, reached out to foreign authorities, in fear their relatives would face ever greater punishment.

Also, at one time, China prized Mr Meng's lofty position at Interpol so it was hard to imagine what he had done for Beijing to willingly, and publicly, forfeit the top job at Interpol.

How has Interpol reacted?

In a statement, the organisation said it was aware of reports of the "alleged disappearance" of Mr Meng.

"This is a matter for the relevant authorities in both France and China," it said.

Interpol added that the secretary general - not the president - was in charge of the day-to-day running of the 192-member organisation.

As president, Mr Meng leads the Executive Committee, which provides the overall guidance and direction to Interpol. Mr Meng's term is scheduled to run until 2020.

Before taking over at Interpol, Meng Hongwei was deputy minister in charge of public security in China.

When Meng Hongwei was elected as Interpol's president in November 2016 he said he was ready to do "everything he could towards the cause of policing in the world".

Mr Meng has 40 years of experience in criminal justice and policing in China, notably in the fields of drugs, counter-terrorism and border control, according to Interpol.

After his election human rights groups expressed concern that the move could help China pursue political dissidents who have fled the country.

Interpol can issue a red notice - an international alert - for a wanted person.

But it does not have the power to send officers into countries to arrest individuals or issue arrest warrants.