Donald Trump says the new trade deal struck with Canada and Mexico is "the most important" ever agreed by the US. 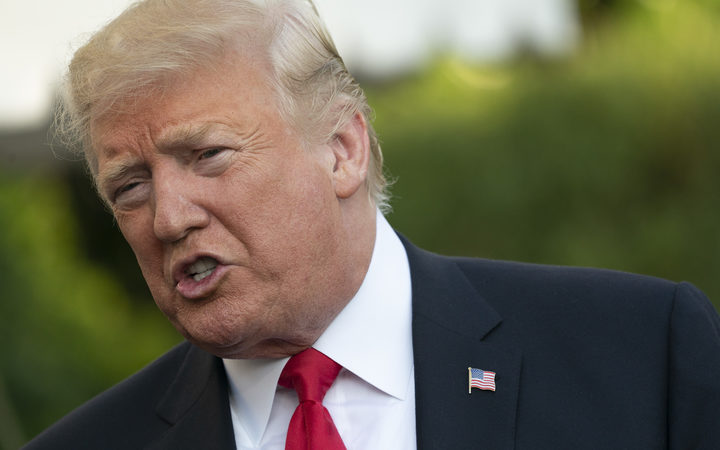 The president said the United States-Mexico-Canada Agreement (USMCA), which replaces Nafta, would bring thousands of jobs back to North America.

The new deal covered trade between the three countries worth $1.2bn and was "truly historic", he said.

It was also "the biggest trade deal in the United States history", he told a press conference.

Mr Trump spoke after earlier posting tweets claiming the new trade pact solved the "deficiencies and mistakes" in Nafta, which has governed trade between the three countries since 1994.

Late last night, our deadline, we reached a wonderful new Trade Deal with Canada, to be added into the deal already reached with Mexico. The new name will be The United States Mexico Canada Agreement, or USMCA. It is a great deal for all three countries, solves the many......

He said the new deal was "much more reciprocal" than Nafta, which he described as "perhaps the worst trade deal ever made".

The measures in the new deal - which Mr Trump dubbed "US MCA" - "will support many - hundreds of thousands - American jobs".

The president has adopted an "America First" policy and launched a trade war against China, as well as imposed tariffs on steel and aluminium imports from Mexico and Canada.

"Without tariffs we wouldn't be talking about a deal," Mr Trump said.

"We had to make compromises, and some were more difficult than others," he said. "We never believed that it would be easy, and it wasn't, but today is a good day for Canada."

However, Mr Trump said it was too soon to talk to China, on which the US has imposed three rounds of tariffs this year, about a trade deal.

Other trading partners had been tough on the US, he said, including the European Union, which introduced retaliatory tariffs on US goods in June.

The president said he was having a "successful negotiation" with the EU.

He said it was "privilege" for other countries to trade with the US: "So we have negotiated this new agreement [with Mexico and Canada] based on the principle of fairness and reciprocity - to me it's the most important world in trade, because we've been treated so unfairly by so many nations all over the world."

The new deal was "terrific" for all three countries, he added.

US farmers will gain access to 3.5% of Canada's dairy market worth $16bn a year, while another requirement stipulates that 40% of components for vehicles produced in the USMCA area must be made in areas paying wages of $16 an hour.

Meredith Crowley, international trade economist at the University of Cambridge, said the agreement on dairy appeared be a "cosmetic concession", suggesting Canada had done well out of the pact.

She said the insertion of a minimum wage level for car parts workers could lead to similar clauses in other trade deals: "If it turns out to be very politically popular in the US it could [be used again]."

Mr Trump said the deal was a victory for farmers, car workers and the US manufacturing industry: "It means far more American jobs, and these are high-quality jobs."