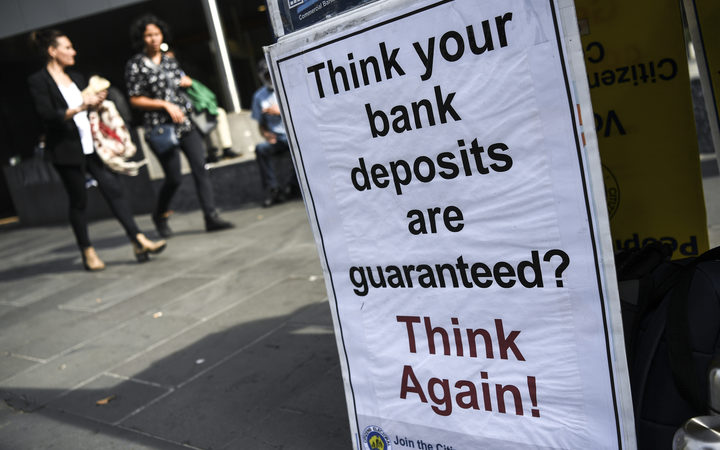 A placard outside the Australian royal commission set up in February to investigate claims of misconduct in the banking sector. Photo: AFP

In the executive summary of the report, Commissioner Kenneth Hayne noted the commission had exposed conduct by financial services firms that had attracted public condemnation.

Mr Hayne said the key questions the commission had to answer were why such poor conduct had occurred and how to stop it happening again.

He said, in many cases, the answer to the first question was obvious.

"Too often, the answer seems to be greed - the pursuit of short-term profit at the expense of basic standards of honesty," he wrote.

"How else is charging continuing advice fees to the dead to be explained?"

Mr Hayne observed that from the executive suite to the front line, staff performance was measured and rewarded based on profit and sales.

"Products and services multiplied. Banks searched for their 'share of the customer's wallet'."

However, the commissioner does not sheet home blame solely to the financial institutions, with the regulators also failing to check their greed.

"When misconduct was revealed, it either went unpunished or the consequences did not meet the seriousness of what had been done," Mr Hayne wrote.

Early indications from the interim report were that the answer to the second question - how to stop bad behaviour recurring - were unlikely to involve a large number of new laws and regulation.

"The law already requires entities to 'do all things necessary to ensure' that the services they are licensed to provide are provided 'efficiently, honestly and fairly'," Mr Hayne wrote.

"Much more often than not, the conduct now condemned was contrary to law.

"Passing some new law to say, again, 'Do not do that', would add an extra layer of legal complexity to an already complex regulatory regime. What would that gain?"

Rather, the commissioner asked whether existing laws should actually be simplified to reflect the fundamental principles that consumers should not be misled, be provided with appropriate services that are delivered with care and skill, and have their best interests put first.

Federal Treasurer Josh Frydenberg echoed the commissioner's focus on the enforcement of existing laws in his initial response to the interim report.

"ASIC [Australian Securities and Investments Commission] needs to be stronger in their approach," he told reporters at a press conference in Melbourne.

"They do need to pursue litigation, to impose the penalties that are available to them, rather than some of these negotiated settlements, which have seen the perpetrators of these offences or misconduct get off too lightly."

For its part, ASIC said it "welcomed" the report.

"ASIC will continue to assist the royal commission and to work with the government, the Parliament and other regulators to build a stronger legislative, enforcement and regulatory framework with tougher penalties," he said.

Mrr Hayne visited the Governor-General this morning to hand over the report, which was tabled by the government this afternoon.

The interim report was due by Sunday, 30 September, and Mr Frydenberg was asked why the government chose to release the report on a Friday afternoon that is a public holiday in Victoria, ahead of a long weekend in several other states and the AFL and NRL grand finals.

The government set the original terms of reference for the commission, which included the 30 September due date for the interim report.

Labor calls for royal commission to be extended

Labor's deputy leader Tanya Plibersek said her party had called for a royal commission into the banks two-and-a-half years ago.

"The Liberals have never taken this seriously," she said.

"They were dragged kicking and screaming into holding a royal commission and they gave it an unreasonably short time frame."

Ms Plibersek said the royal commission needed to be extended to hear from more of the victims of bank misconduct.

"More than 9000 submissions have been received by the royal commission, but so far only 27 customers have had the chance to tell their stories publicly," she said.

"Given this damning interim report, we believe that there is a strong case to consider extending the banking royal commission in order to hear from more victims in more places, in more parts of Australia."

'A day of shame for Australia's banks'

Responding to Commissioner Hayne's damning assessment of the nation's financial institutions, the Australian Banking Association's (ABA) chief executive Anna Bligh said "there is no place for greed in the Australian banking system".

"Make no mistake, today is a day of shame for Australia's banks," she said.

"Having lost the trust of the Australian people, we must now do whatever it takes to earn that trust back.

"Banks accept full responsibility for their failures and right now in every bank people are working day and night to make things right for their customers."

The ABA will be making a submission, along with other financial sector lobby groups, about what recommendations the commission should make to address the many problems it has identified.

The commission's final round of hearings in Sydney, starting on 19 November, will examine the possible policy responses to the misconduct that has been identified.