A New Zealand man has been jailed for 14 days and fined $2500 for poisoning 406 wedge-tailed eagles at three remote properties in the Australian state of Victoria. 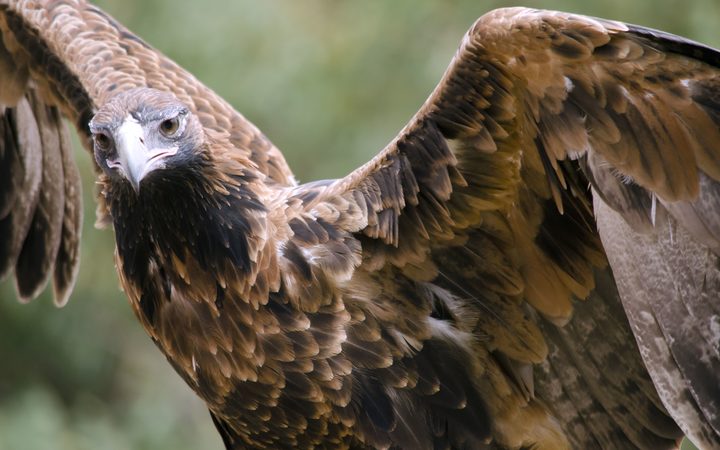 The eagle carcasses were found hidden in bush and scrub on three separate farms spanning 2000 hectares.

Other protected species including a kookaburra, ravens and a raptor were also found dead.

Department of Environment, Land, Water and Planning (DELWP) prosecutor Chrisanthi Paganis told the Sale Magistrates' Court that Silvester alerted authorities to the deaths in May 2018, one month after he stopped working at the farm due to an argument with his boss, landowner John Auer.

Silvester provided investigators with two diaries detailing the methods used and a hand-drawn map showing where the eagle carcasses were hidden and where the chemicals were stored.

The prosecutor told the court other people were being investigated over the killings but had not been charged.

Ms Paganis told the court three different chemicals were used to kill the eagles, but most of the eagle deaths were caused by the chemical Lannate.

"John Auer showed him how to do it by injecting the substances into the necks of lambs," Ms Paganis told the court.

Lannate caused the eagles to die within 30 minutes of feeding on the sheep and lamb carcasses, the court heard.

Over the 18-month period, Silvester experimented with other chemicals, including a blue phosphorous which made the eagles severely sick but did not kill them straight away.

The court heard Silvester admitted to killing 366 eagles during 2017 and another 40 in early 2018 at the properties at McKillops Road, Tubbut.

A report for DELWP estimated it would take two-and-a-half years before breeding recovered to its pre-kill levels.

"This is our first custodial sentence for the destruction of wildlife in Victoria, so it's a significant statement to make by the courts, that this is a very, very serious matter and this is how it will be dealt with," said Iain Bruce, the manager of DELWP's investigations and intelligence unit.

In May 2018, investigators searched the remote properties at Tubbut and found 90 eagle carcasses, skulls, traps, decomposing sheep carcasses and chemicals.

A further 40 eagle carcasses were found during subsequent searches.

In evidence, Silvester told authorities he estimated he had killed up to 420 wedge-tailed eagles during his time employed on the Tubbut farm.

"He knew it was unlawful to kill them," Ms Paganis told the court.

"His actions were conscious, voluntary and deliberate, he googled them, he knew they were protected species."

Mr Bruce said five separate searches had been conducted so far as part of the investigation.

"We're getting very close to the end of our investigation, but today's proceeding only deals with one of those offenders.

"It was under the instruction of his employer," Mr Borthwick said.

He said Silvester was under pressure to increase lamb survival rates.

The court was told the maximum penalty for killing so many eagles was more than $350,000 or six months' jail.

"You brought this to the attention of authorities because you had an argument with your boss," Magistrate Rodney Higgins told Silvester.

Mr Borthwick said the prosecution had brought the matter on before the case against his co-accused was completed, because they feared Silvester was planning to return to New Zealand.

Silvester asked to address the magistrate and said: "[The] Wildlife [department] have lied, they told me it would only be a fine. I just want to put this behind me and go home."

"You'll be back home in New Zealand in a month," the magistrate told Silvester.

The magistrate told the court he would have sentenced Silvester to three months in prison, had he not pleaded guilty to the charges at the first opportunity.

Retired wildlife officer Roger Bilney said the illegal killing of wedge-tailed eagles was not isolated to the Tubbut case.

"This is threatening the whole species and it's an iconic bird. People will stop and watch as they soar past. The wedge-tailed eagle is an iconic bird, a part of the Australian landscape," he said.

He said eagles were also targeted as predators to lambs in New South Wales and Queensland.

"Especially with the value of wool and lambs increasing, a lot of farmers see the wedge-tailed eagles as a threat to their profitability," Mr Bilney said.

"They're certainly capable of killing newborn lambs, and we know that they do that at times and they will team up and do it, but in terms of the overall losses on a sheep farm, research shows it's irrelevant to the overall property," Mr Bilney said.

"Especially with the drought, and so many lambs dying due to the ewes being in poor condition, there'd be a higher mortality due to poor farming practices, or things like drought that are beyond their control," Mr Bilney said.