American comedian Bill Cosby could spend the rest of his life behind bars as he faces sentencing after his conviction for sexual assault. 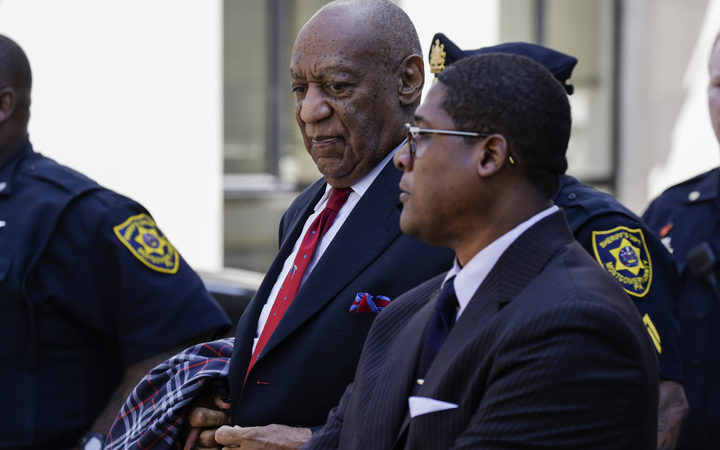 Actor and comedian Bill Cosby was found guilty on three counts of sexual assault against a woman in 2004. Photo: AFP

The two-day sentencing hearing at Montgomery County Courthouse in Pennsylvania will start this week.

At a retrial in April, the 81-year-old actor was found guilty of three counts of sexual assault against ex-basketball player Andrea Constand in 2004.

Ms Constand said she had viewed him as a "mentor" before he abused her.

In June 2017, she described being given pills that left her "frozen" and unable to stop Cosby from assaulting her.

There is a wide range of possibilities for Cosby's sentence.

He could receive a prison term of up to 10 years for each count - which legal commentators have said is unlikely to happen.

Alternatively, all three counts may be merged into a single term of up to 10 years.

There is no mandatory minimum for the convictions. That means Cosby could be sentenced to probation, or to continued house arrest.

The 81-year-old has been free on $1 million bail, but has to wear a GPS monitoring device. He can only leave his home with prior permission, to meet his lawyers or get medical treatment.

One key issue for the sentencing hearing is whether Cosby will be designated a "sexually violent predator". If that happens, he will be obliged to register as a sex offender for life, instead of for a shorter timeframe decided by a judge.

Whatever the outcome, the sentencing marks an astonishing fall from grace for the comedian - the culmination of decades of sexual assault accusations from more than 60 women across the US.

Many see his arrest and subsequent conviction earlier this year as a high-profile legacy of the #MeToo movement - which has seen people across the world come forward to share their stories of sexual harassment and sexual assault.

The comedian's arrest in 2015 predated #MeToo, but after a deadlocked jury resulted in a mistrial in June 2017, the subsequent 2018 retrial may have been influenced by the social movement.

The judge allowed five other women to testify in the trial under a "prior bad acts" rule in the state of Pennsylvania, which allows testimony if it reveals a defendant's pattern of behaviour.

However, the New York Times reports that the judge has denied a prosecution request to allow women to testify at the sentencing hearing whose allegations of molestation did not lead to criminal charges.

This avoids a repeat of the trial of ex-Team USA gymnastics doctor Larry Nassar, who faced testimony from more than 100 women during his sentencing hearing.

While some will be disappointed not to voice their accusations in court, experts say it could remove a lengthy part of the trail and speed up the hearing.

Allegations against the comedian date back to the 1960s. That was the decade Cosby began his career, debuting on NBC's The Tonight Show in 1963 as a stand-up comic.

He then rose to fame starring on numerous television shows, before establishing himself as a household name with eight seasons of The Cosby Show, beginning in 1984.