An international rescue team is trying to reach a seriously injured Indian sailor who is taking part in the Golden Globe round-the-world race. 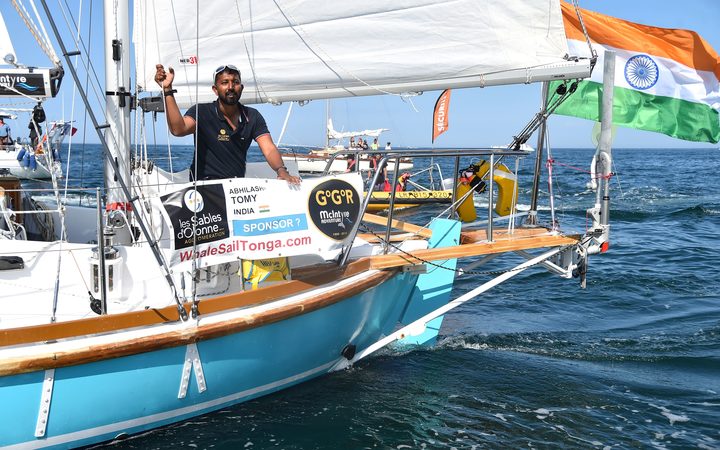 Abhilash Tomy onboard his boat Thuriya as he set off from France on the Golden Globe Race on 1 July. Photo: AFP

Solo yachtsman Abhilash Tomy is stranded 3200km off the coast of Western Australia.

His yacht Thuriya had its mast broken during a severe storm in the Indian Ocean.

He managed to send a message saying he has a severe back injury and is immobilised, unable to eat or drink.

The storm whipped up 70-knot winds and 14-metre waves, which twice knocked down the yacht of Dutchman Mark Slats.

Most of the 11 competitors still in the race were further north and avoided the worst of the storm, organisers said.

An Irish race competitor, Gregor McGuckin, whose own yacht was damaged in the storm, has set up a temporary rig and is attempting to cover the 150km separating him from Tomy's position.

A French fishing vessel is also in the area, but could take several days to reach the scene.

An Australian Air Force plane is due to overfly the area and assess the Thuriya's seaworthiness.

Race organisers said Tomy was "incapacitated on his bunk inside his boat.... as far from help as you can possibly be".

"The Australian Joint Rescue Co-ordination Centre is working hard to assess and coordinate all possible options to rescue Abhilash Tomy," the organisers said.

The 39-year-old Indian Navy commander is communicating using a texting unit, after his satellite phone was broken.

On Saturday, he sent a message, saying: "Extremely difficult to walk, Might need stretcher, can't walk, thanks safe inside the boat ... Sat phone down."

Tomy has a spare satellite phone in an emergency bag, but he is unable to reach it at present.

The Golden Globe race involves a single-handed circumnavigation of the globe - a distance of 30,000 miles (48,280km) - without using modern technology, except for satellite communications, Competitors started from France on 1 July; seven boats have so far withdrawn from the race.

In 2013, Tomy became the first Indian to sail around the world.

The Thuriya is a replica of Robin Knox-Johnston's Suhail, winner of the first Golden Globe Race in 1968.