A four-week-old meerkat stolen from Perth Zoo has been returned after the police found it at a house 130 kilometres away. 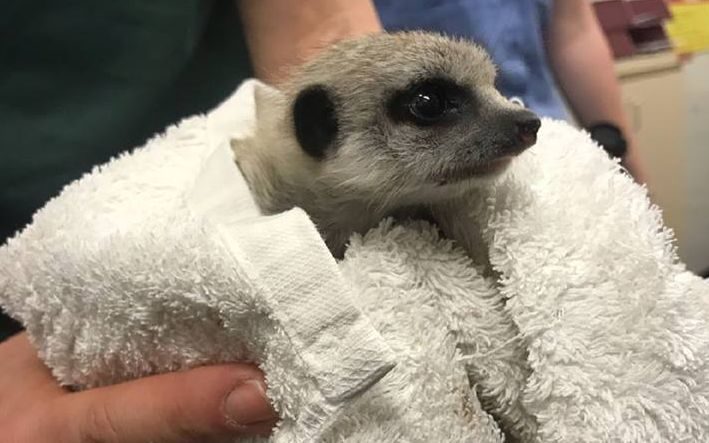 Zoo staff noticed the baby meerkat was missing from its enclosure on Wednesday afternoon, less than 24 hours before an event to introduce the animal to the public.

They were unsure if it had been stolen or taken by a predatory bird.

Following the recovery by the Western Australia Police Force and return to Perth Zoo, our vets gave the young meerkitten a quick health check this morning! pic.twitter.com/jNVRSggJDo

WA Police have confirmed it was stolen and said it was found in Beverley, a small town about 130km south-east of Perth.

"As a result of inquiries by Kensington Police, a search warrant was executed at a house in Beverley around 6:00pm [last night]," a police spokesman said.

"The baby meerkat was located at the house and was conveyed back to the zoo by a veterinarian.

"A man and woman are currently assisting police with their inquiries."

Meerkit recovering away from family

The zoo said the meerkit was back in expert care and staff were busy preparing to reintroduce it back successfully with its family.

Senior vet Simone Vitali said the animal would be returned to its mother soon.

"He was very stressed and tired and hungry, just like any bub that's been away from mum.

"But after an evening of getting his favourite foods and getting a bit of warmth and a bit of quiet, he's really bounced back quite well, so we're quite happy with his progress so far.

"He's still not out of the woods, we've still go to get him back with the group and hope that they accept him as one of theirs and they haven't decided to reject him, so we're still in very early days."

Enclosure to be reviewed, zoo says

Ms Vitali said the safety of the meerkat enclosure may need to be reviewed following the incident.

"When you've got these open facilities, which you need [in order] to give the animals good welfare, you like to have them open and have lots of sunlight, lots of air, lots of height," she said.

"That's something that we're going to need to review quite carefully now that this has happened to see if we need to make changes."

Speaking on Thursday after the meerkat was taken, the zoo's curator of operations, John Lemon, said the newborn was under almost-constant watch.

But he admitted there was a small window in which it could have been taken.

"It's quite an effort to get into our meerkat enclosure. We have a glass viewing bay that surrounds the viewing area," he said at the time.