A person is dead and dozens of homes have been set ablaze in a gas explosion fire in the US state of Massachusetts. 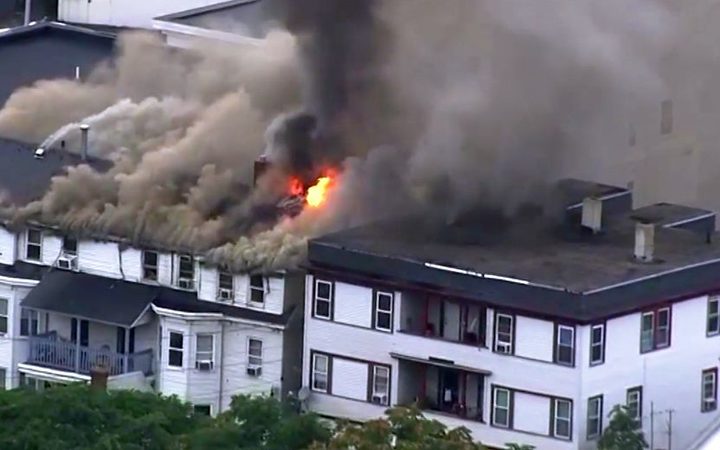 A screenshot from local media shows one of the buildings that caught fire after a series of explosions. Photo: Screenshot / WCVB

Blasts in three towns north of Boston are thought to have been caused by the rupture of an overpressurised gas main.

Hundreds of residents have been told to evacuate their homes and there is a strong smell of gas in their air.

"Firefighters literally were called to over 70 addresses in Lawrence, Andover, North Andover for reports of fires, explosions or gas odours. We know that all those fires at this point are out."

Boston television station WCVB-TV reported multiple injuries from more than 60 explosions across the area, and said that the local power company had shut off electricity to the affected communities.

State police put the tally of fires and explosions at 39 and said the number was expected to grow.

Authorities said nothing to indicate any foul play was suspected. Local media reports cited the possible rupture of a gas line. The first explosion was triggered by an overpressurized gas line, WBZ News reported.

"We are asking everybody with gas in their homes to leave their homes until further notice," North Andover town manager Andrew Maylor told one local television station.

Lawrence Mayor Dan Rivera told WBZ: "What we know is that there are have been multiple explosions, multiple fires that are happening across the city." He said residents detecting strange odors should leave their homes.

State police urged residents served by the Columbia Gas company, a unit of NiSource Inc, to evacuate their homes, saying the utility was cutting pressure to its lines and that it would take "some time" to shut off all service.