Guatemala has deployed members of the feared Kaibil special forces unit to stop protesters from interrupting a session of parliament, triggering anger among opposition leaders who say President Jimmy Morales is using the military to cow critics. 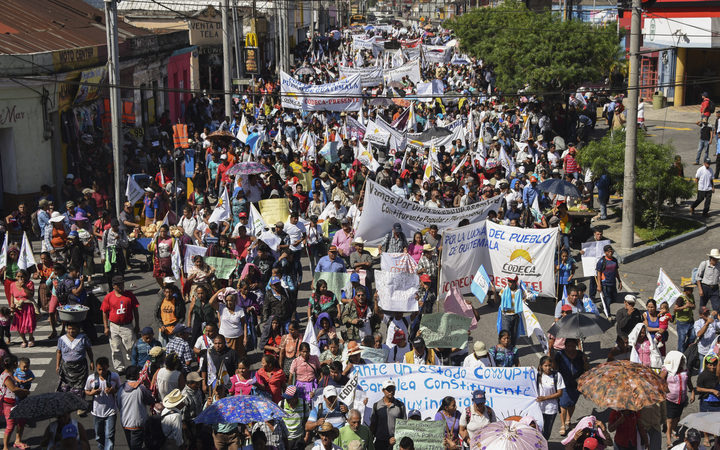 Members of the Peasant Development Committee march in Guatemala City to demand the resignation of Guatemalan President Jimmy Morales and the renewal of the mandate of an anti-corruption mission of the UN. Photo: AFP

The deployment of thousands of police and soldiers today was the latest example of Morales resorting to displays of military strength since he announced the winding down of a UN-backed anti-corruption commission last month.

That move, and his subsequent barring from Guatemala of the head of the commission, have triggered global criticism and mounting street protests across the Central American nation.

Repressive military dictatorships in the 1970s and '80s has left Guatemalans sensitive to the use of military for internal security and political purposes since the country's 36-year civil war ended in 1996.

"There is free expression of thought in Guatemala... but freedom does not mean to hit, abuse, break or stain," Morales said to applause from his allies in a speech to mark Independence Day in Congress.

"I repeat my call for peace, for unity," he said, as Kaibil soldiers in red berets bearing semi-automatic weapons formed a cordon around the building.

The heavy security presence, which also involved more than 2000 police, prevented a large march from getting close to Congress, after protesters on Wednesday crowded lawmakers and shouted abuse to oppose a bill they say weakened independent institutions.

Created in the 1970s to fight a counter-insurgency campaign against Guatemala's leftist guerrillas during the civil war, which left over 200,000 dead, the Kaibils were infamous for their brutality and involvement in an emblematic massacre.

"I decline to participate in the solemn session in parliament, because I cannot take part in an event with the unnecessary and intimidating presence of the army toward a population that has the legitimate right to protest," the country's Human Rights Ombudsman, Jordan Rodas, said on Twitter.

His sentiments were echoed by several opposition lawmakers who described the security measures as disproportionate for a peaceful protest.

The police and troops blocked off parts of the city center as farmers and students marched for a third day, carrying signs that said "No more corruption" and demanded the resignation of Morales.

Late last month, Morales said the country would not renew the mandate of the International Commission Against Impunity in Guatemala (CICIG) that had brought down his predecessor and also tried to have Morales impeached. The United Nations has expressed serious concerns about the decision.

"We demand the president let the CICIG continue. We do not want more corruption," said Cirilo Perez, a local indigenous leader who helped organize protests.

Demonstrators are also protesting two legislative initiatives that lawmakers who back Morales are aiming to pass in the coming days.

One bill would limit the ability of investigators to strip politicians of their immunity from prosecution and another would permit almost 80 congressmen who have defected from the opposition to join Morales' party.

Working with Guatemala's attorney general, the CICIG in 2017 sought to prosecute Morales, a former comedian, over illegal financing allegations during his election campaign two years earlier. Morales denies any wrongdoing and says the CICIG has overstepped its remit.

When Morales announced his decision not to renew CICIG's mandate he was flanked by rows of soldiers. US-donated military vehicles appeared at the commission's offices that day in a move criticised by as a political statement.

CICIG has a year to exit the country. Despite previous staunch support from the United States for the anti-corruption body, the State Department has not spoken strongly to back it this time.

Morales has aligned himself closely with President Donald Trump by moving the Guatemalan embassy in Israel to Jerusalem.