An American man forcibly separated by the Catholic Church from his parents as a toddler has, seven decades later, finally learned the truth about his father - by exhuming his body. 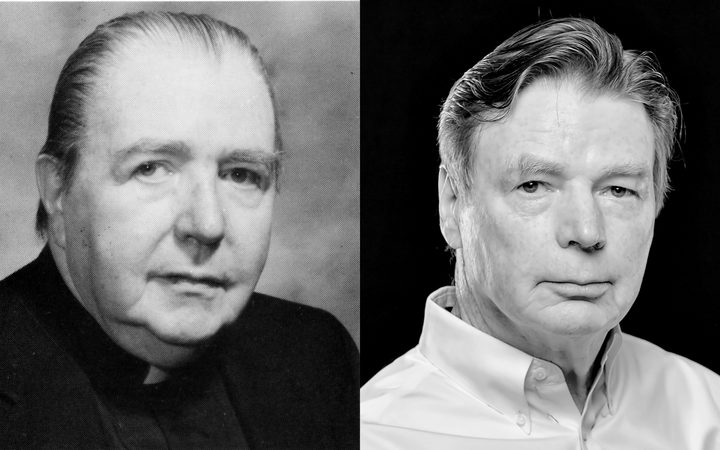 An uncanny likeness? Father Thomas Sullivan, left, and Jim Graham, who had the priest’s body exhumed to prove it's his father. Photo: Supplied

Jim Graham of Seneca, South Carolina, was convinced his father was a priest, Thomas Sullivan.

But the head of the Church Order the priest had been part of, Father Louis Studer of the Missionary Oblates of Mary, told him he would never be able to prove it, Mr Graham told RNZ.

He would never have done this before because it would have been "grandstanding - because they're never going to give me the right to do that."

But after a quarter-century of fighting to prove his claim, he'd had enough - and was stunned when the Order agreed to the exhumation.

The final segment in a nine-part series produced by WRGZ TV in Buffalo, an NBC affiliate. Steve Brown is the investigative reporter who brought life to my story and that of my parents, where it all began, 73 years ago. https://t.co/xK8VbR81Jr pic.twitter.com/znYhszIgXj

Mr Graham likened it to poker: He believes the church never thought he would go through with what he described as "a gruesome procedure" - so they would end up looking magnanimous and he would back down.

"When I gave them the date I was going to do it, then they couldn't withdraw it... I can't think of any other reason why [they would let me]. Because it certainly looks worse for the church right now, to deny me the truth for all these years and then say, 'well, if you're going to find out you have to go through this process', which no one has ever done before that I know of."

The 73-year-old sells golf simulators to rich people. For decades, he said, he didn't know he even had a secret.

Finally at the age of 48 he asked elderly relatives why the man he thought was his father always seemed to dislike him so much.

When he found out what happened, he was driven to force the church to confess how it broke up his parents' relationship, punished his father in a camp for wayward priests for years, then took him off his mother and put him in her ex-husband's house to look like he was his son.

It took a while to organise the exhumation in a Catholic cemetery in Tewksbury, arranging permits with the council, funeral directors to witness it, and a forensic anthropologist to take the DNA sample.

An expected 90-minute exhumation turned into a three-hour one when the steel coffin had to be power-sawed open, then a new coffin found to replace it and transfer the remains. Church officials used a camera to record the exhumation.

This week, 10 weeks on, Mr Graham drove 1500km from his home to the forensic anthropologist's office in Boston, where the results, which only a medical professional or lawyer could receive, had been delivered.

"It means when I tell my story, people won't doubt my story... I told them up front, I'm not interested in money, I'm just interested in their acknowledgement of what they did to my parents back in the 40s.

"My purpose was to really confront the Catholic Church... they said things like, 'Forget the injustices of the past' - that only propelled me more so to find the truth.

"That's the way I am: I feel the truth is more powerful than anything else and that's what I'm going to seek."