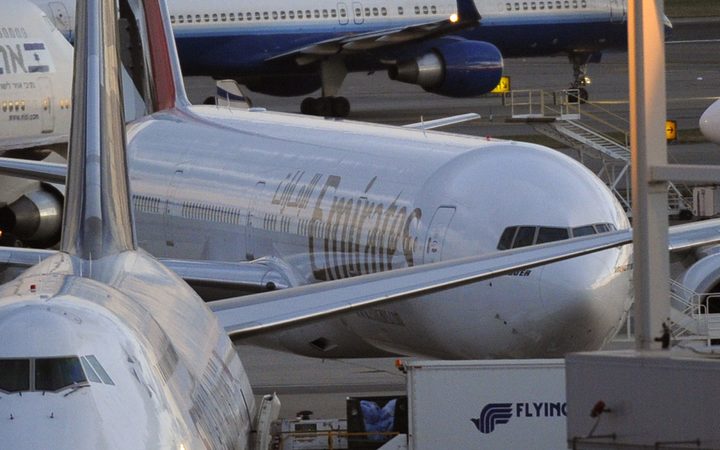 The plane was quarantined at JFK airport as those on board were checked by health officials. Ten were taken to hospital but others refused treatment.

The US Centers for Disease Control and Prevention (CDC) said that initially about 100 people including some crew had complained of illness.

Emergency vehicles were seen on the runway as it landed.

Soon afterwards, Emirates airline tweeted that the sick passengers were being attended to and those who were unaffected would be allowed to leave the plane.

The CDC said in a statement that is was "aware of an Emirates flight from Dubai that arrived this morning at JFK".

"Approximately 100 passengers, including some crew on the flight, complained of illness including cough and some with fever.

"CDC public health officers are working with ... officials to evaluate passengers including taking temperatures and making arrangements for transport to local hospitals those that need care."

Later Eric Phillips, spokesman for New York Mayor Bill de Blasio, confirmed that all the passengers were off the plane and the sick people had been taken to hospital.

He said that some of the passengers had originally come from the Saudi Arabian city of Mecca, which was currently experiencing a flu outbreak, and that the passengers' symptoms were "pointing to the flu".

Larry Coben, a passenger on the plane, posted pictures on Twitter of unaffected passengers being checked as they disembarked.

ABC News reports that the pilot raised concerns prior to landing that some of the passengers were coughing and experiencing high temperatures.

Emirates said all passengers were screened by the local health authorities and had left the plane.