A leader of Russian-backed separatists in eastern Ukraine, Alexander Zakharchenko, has been killed in an explosion at a cafe in Donetsk city. 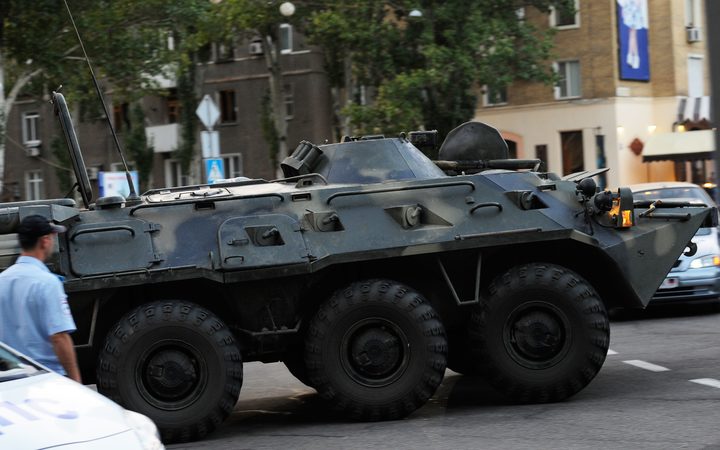 An armoured vehicle rides in the street in Donetsk, eastern Ukraine, after Alexander Zakharchenko was killed Photo: AFP

"The head of the DNR [Donetsk People's Republic]... has died as the result of a terrorist attack," Zakharchenko's spokeswoman told AFP news agency.

The Ukrainian government has denied any involvement.

Some observers have attributed previous deaths of rebel leaders in Donetsk to infighting among the rebels, or moves by Moscow to eliminate inconvenient separatist leaders.

Rebel and Russian news reports say the separatists' "finance minister" Alexander Timofeyev was wounded in the blast at the Separ cafe that killed Zakharchenko.

Ukrainians suspected of being behind the blast were arrested nearby, a security source was quoted as saying.

Russian foreign ministry spokeswoman Maria Zakharova said "there is every reason to believe that the Kiev regime is behind the murder".

She said the Kiev "party of war" was "violating its pledges about peace and has decided on a bloodbath".

However, recent reports suggested that Zakharchenko had fallen out of favour with Russia.

She said the killing was a result of "internal fighting... between the terrorists and their Russian sponsors".

Heavily armed rebels in Donetsk and Luhansk regions refuse to recognise the Ukrainian government in Kiev.

The rebels seized large swathes of territory there in an uprising in April 2014. Since then, thousands of people have died in fighting between the rebels and Ukrainian government forces.

Moscow denies sending regular troops and heavy weapons to the separatists, but admits that Russian "volunteers" are helping the rebels.

The frontline between them and Ukrainian government troops has remained largely static for months, but skirmishes continue despite a fragile ceasefire deal.

There has been shooting on the frontline despite a "back-to-school truce" that was supposed to take effect on Wednesday. International monitors reported 70 ceasefire violations on that day alone.

Who was Alexander Zakharchenko?

He played a key role in the Russian-backed separatist military operation from its very beginning.

In early 2014, soon after Ukraine's pro-Russian government was toppled by the Maidan revolution, he took part in the seizure of the Donetsk regional administration building by people saying they were protesting against the new pro-Western authorities.

Later that year, he was chosen as the prime minister of the self-proclaimed Donetsk People's Republic by its parliament, the "Supreme Council".

He had been in the role ever since, assuming the title of president, and was among the signatories of the stalled Minsk peace agreement.

He was wounded twice in combat, and survived a car bomb blast in August 2014.