Astronauts on the International Space Station (ISS) are having to deal with an air leak from a possible collision. 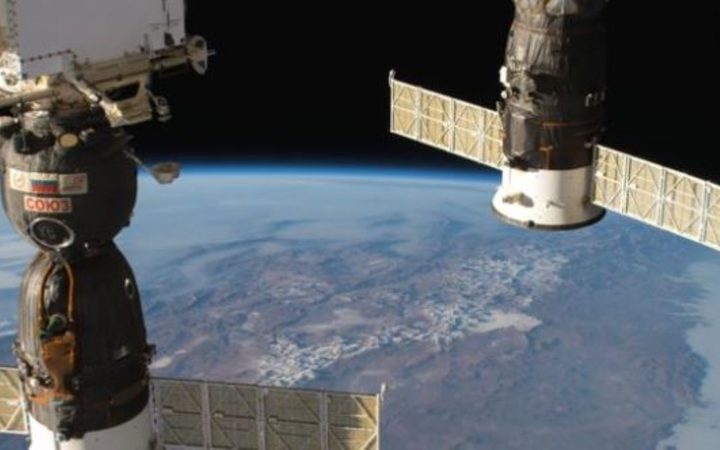 It has been traced to a small hole in a capsule that was used to deliver a new crew to the laboratory 400km above the Earth in June.

It is thought the damage was caused by the impact of a high-speed rocky fragment flying through space.

Mission controllers in Houston, Texas, and Russia's capital, Moscow, say the six-strong crew are in no danger.

Impacts from tiny meteoroids are a permanent threat to the orbiting platform and it was built to withstand the constant bombardment from the dusty fragments that whizz about above the Earth.

Mission controllers were first alerted to the issue by air pressure sensors on board the station.

The astronauts were asleep at the time, but when they rose for their day's work on Wednesday they were instructed to search for the leak.

They found it in the Russian Soyuz vehicle used to bring three crewmen to the station on 8 June, among them Europe's Alexander Gerst, who is set to take command of the outpost.

"Overnight and in the morning there was an abnormal situation - a pressure drop, an oxygen leak at the station," chief of the federal space agency Roscosmos, Dmitry Rogozin, was quoted as saying by Russian news agencies.

"A micro-fracture was found; most likely it is damage from the outside. The design engineers believe it is the result of a micrometeorite," he said.

Germany's Gerst confirmed the presence of the hole by running his finger over it.

An immediate fix was implemented using a sealant and tape to cover the hole, which is said to measure a couple of millimetres in diameter.

The astronauts are now working with engineers on the ground to assess whether a more robust repair is needed.

Gerst, along with US astronaut Serena Auñón-Chancellor and Russian cosmonaut Sergei Prokopyev, are due to use the same Soyuz vehicle to return to Earth at the end of the year.