A boat found abandoned in crocodile-infested waters in Australia is believed to be a "people smuggling venture", the nation's government says. 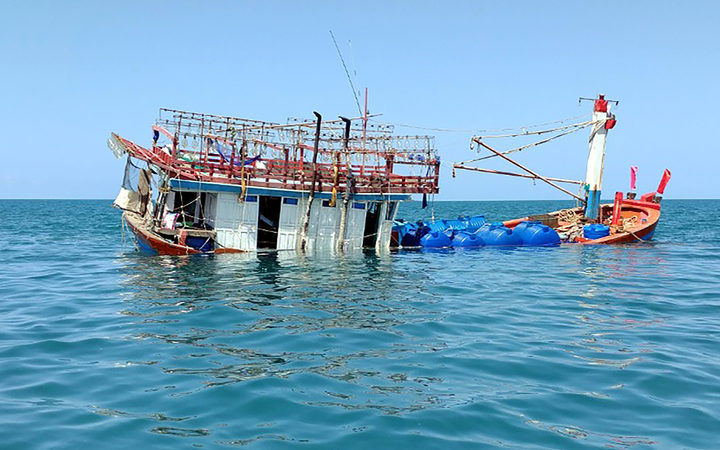 The abandoned fishing boat in the Daintree near Cape Kimberley in Queensland. Photo: AFP

Authorities have detained 15 people and think more are hiding in mangroves north of Cairns, say police.

The boat, believed to be from Vietnam, is the first people-smuggling vessel to make it to Australia "in more than 1,400 days", according to Home Affairs Minister Peter Dutton.

Authorities are continuing a search.

They did not say how many people were aboard when the boat ran aground near Daintree on Sunday, nor if any have plans to appeal for asylum.

Local mayor Julia Leu told ABC that they were "putting themselves at risk in known crocodile habitat".

Australia strictly monitors vessels that enter its waters, meaning irregular arrivals are usually intercepted well before making it to land.

"Clearly there has been a failure when surveillance has not worked as it should in identifying this vessel," Mr Dutton told media on Monday.

Australia has previously sent all asylum seekers who arrive by boat to offshore processing centres in Nauru and Papua New Guinea's Manus Island.

Even if found to be refugees, they will never be offered resettlement in Australia - a controversial policy designed to deter future arrivals.

Another Australian government minister, Steve Ciobo, told Sky News Australia that the group "should be sent to Nauru" or "somewhere offshore".