US playwright Neil Simon, whose name was synonymous with Broadway comedy and theatre, has died in New York. 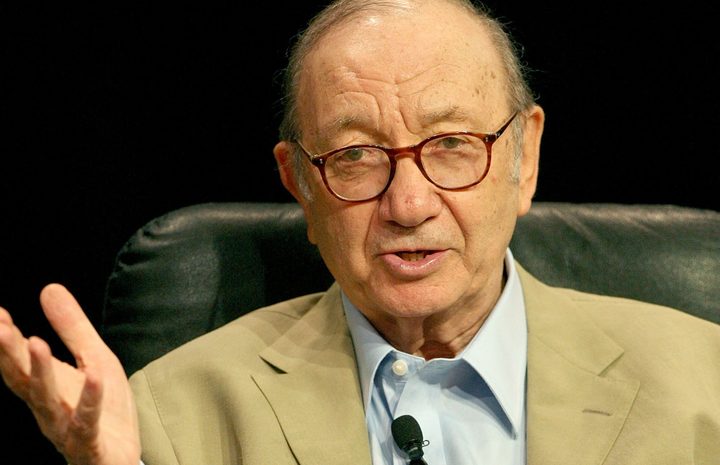 Neil Simon, who has died aged 91, grew up in the New York City borough of the Bronx. Photo: AFP / Getty Images

The Odd Couple and Barefoot in the Park writer had more than 30 plays on Broadway, and also wrote numerous films, some original and other adaptations of his theatre works.

He won a Pulitzer Prize in 1991 for his play Lost in Yonkers, and received more Oscar and Tony nominations combined than any other writer.

Simon also wrote original screenplays, the best known being The Goodbye Girl, starring Richard Dreyfuss as a struggling actor, and The Heartbreak Kid, which featured Charles Grodin as a recently married man, lusting to drop his new wife for a blonde goddess played by Cybill Shepherd.

Many of his plays were adapted into movies and one, The Odd Couple, became a popular TV series.

Simon drew on his tumultuous New York Jewish upbringing in many of his works.

A new Simon play almost every theatrical season was a Broadway staple from 1960 through the mid-1990s, placing him in the ranks of America's top playwrights. He wrote more than 40 plays that were funny, moving and immensely popular - sometimes shifting from slapstick to melodrama with the turn of a phrase.

At one point he had a record four plays running simultaneously on Broadway.

Simon was called "not just a show business success but an institution" by one New York critic. While his voice and comedy were decidedly East Coast and often reflected an ethnic Jewish experience, Simon's works played to packed houses around the world.

He won Tony Awards for The Odd Couple, Biloxi Blues, and Lost in Yonkers and a fourth for his overall contribution to American theatre. He was nominated for 13 other Tonys.

Lost in Yonkers (1990), a painfully funny story about the relationship between an abusive mother and her grown children, also won the Pulitzer Prize for drama in 1991.

Simon's childhood was marred by the breakup of his parents. At first he was reluctant to draw on that pain, fearing it would make his plays too dark.

Later in his career he would use his own painful experiences, such as in the semi-biographical Brighton Beach Memoirs, to give his work more depth.

But being entertaining was his primary goal.

"When I was a kid, I climbed up on a stone ledge to watch an outdoor movie of Charlie Chaplin," Simon once told Life magazine. "I laughed so hard I fell off, cut my head open and was taken to the doctor, bleeding and laughing.

"... My idea of the ultimate achievement in a comedy is to make a whole audience fall onto the floor, writhing and laughing so hard that some of them pass out."

Big Bang Theory creator Bill Prady said there was "no American comedy writer whose work isn't influenced by the rhythm and music of Neil Simon's words."

Mark Hamill called Simon a "giant of the American theatre".

He was admitted to the hospital a few days ago and the pneumonia was in his lungs, longtime publicist and friend Bill Evans said.

Evans said he gave Simon a kidney in 2004. "It was wonderful to be in his life and for him to be in my life," he said, calling Simon a major figure in American culture. "It has been so great to be part of all of it."

Simon was married five times, twice to actress Diane Lander. He is survived by wife Elaine Joyce and his three daughters from different marriages, Evans said.