A boatie has been rescued after his boat hit a whale and sank, leaving him floating alone in the water for more than two hours, off the western side of Queensland's Fraser Island. 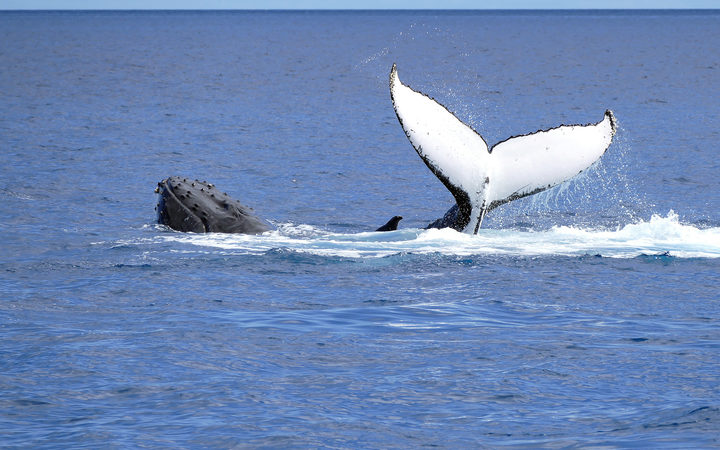 The 42-year-old man, who was wearing a life jacket, made a distress call to authorities just after 3:00am on Sunday as his eight-metre boat was sinking.

The helicopter spotted the man floating in the water about 4:30am, with the Queensland Water Police then able to find him and bring him back to the mainland.

"The police vessel was underway and arrived on scene about 5:10am," he said.

"He had an injury to his upper left arm and rib area so it was a little difficult to get him into the vessel.

"He was quite fatigued and relieved at the same time and also suffering a bit of hypothermia.

"With the effects of the cold, [it] was a little bit difficult to get to much information from the gentleman."

Senior Constable Collings said Queensland Ambulance Service (QAS) officers then arrived on a second boat to treat the man at the scene.

"Once the QAS officers treated the gentleman, he certainly recovered reasonably quickly," he said.

The man was then taken to Hervey Bay hospital, south of Bundaberg.

A hospital spokesperson said the 42-year-old was in a stable condition and under observation.

"He was in the water and able to activate his emergency positioning beacon and police put a helicopter up and found him in the water," she said.

The man spent more than two hours in the water in the dark before being picked up by a police launch.

All those involved in the rescue said the man had luck on his side, given it was dark.

The man was also wearing a life jacket with a flashing light.

"It's pretty difficult - we are very lucky that he had a distress beacon on him that he activated," Ms Barclay said.

Fears whale may be 'seriously hurt'

There has been no sighting of the whale involved in the incident, but boaties have been urged to keep an eye out for a whale with possible injuries.

Marine biologist Yvonne Miles, who is based at Hervey Bay working with Whale Song Cruises, said there was concern there would now be an injured whale in the bay.

"There is a high likelihood we will now have an injured whale with a blunt-force trauma from the boat." she said.

"If the boat has smashed up, then that whale is going to be seriously hurt."

Ms Miles said she had spoken to a few of the local whale boat operators to keep their eyes open to see "if they find any whale in serious trouble".

"I just don't understand why you would be travelling at speed at three o'clock in the morning," she said.

"Hervey Bay is a place where the mums and calves come to rest and feed up and grow.

"If you're not from the area possibly this could happen, but if you are local, then this really should not happen.

"He must have been travelling fast, because whales won't breach at that time of night - they are not active at night - so to be actually hit by a whale would be very unlikely."

'Not something that happens regularly'

It is not the first whale strike in the Wide Bay, which is one of Australia's top destinations to see humpback whales.

"It's not something that happens regularly but we do hear of it occasionally - usually the whales are pretty aware of boaties around them," Ms Barclay said.

Last year, six men in a boat were thrown into the air by a breaching whale near Gloucester Island in Queensland's Whitsundays region.

Two of the men were knocked unconscious with one suffering facial injuries.

Maritime Safety Queensland said just 11 whale strikes had been officially reported in the four years to 2016.

But that figure is likely to go up given the increasing numbers of whales migrating up the Queensland coast each year.