China's military has expanded its bomber operations in recent years while "likely training for strikes" against the United States and its allies, a Pentagon report released says. 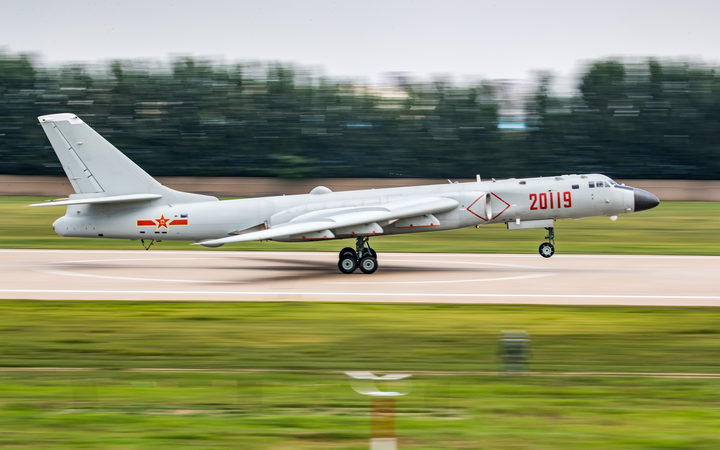 The assessment, which comes at a time of heightened US-China tensions over trade, was contained in an annual report that highlighted China's efforts to increase its global influence, with defense spending that the Pentagon estimates exceeded $US190 billion ($NZ287.95b) in 2017.

"Over the last three years, the PLA has rapidly expanded its overwater bomber operating areas, gaining experience in critical maritime regions and likely training for strikes against US and allied targets," the report said, using an acronym for China's People's Liberation Army.

The report comes as China and the United States plan to hold trade talks, offering hope they might resolve an escalating tariff conflict that threatens to degenerate into an all-out trade war.

The report said that while the PLA had continued to extend operations, it was not clear what message Beijing was seeking to send by carrying out the flights "beyond a demonstration of improved capabilities."

The Chinese embassy in Washington could not immediately be reached for comment.

This year China's air force landed bombers on islands and reefs in the South China Sea as part of a training exercise in the disputed region.

In January, the Pentagon put countering Beijing, along with Russia, at the center of a new national defense strategy.

While Washington and Beijing maintain a military-to-military relationship aimed at containing tensions, this has been tested in recent months, notably in May when the Pentagon withdrew an invitation to China to join a multinational naval exercise.

In June, US Defense Secretary Jim Mattis became the first Pentagon chief to visit China since 2014.

The Pentagon report said that despite a projected slowdown in economic growth, China's official defense budget would be more than $US240b by 2028.

"The PLA continues to strengthen its military space capabilities despite its public stance against the militarization of space," it said.

This month, President Donald Trump's administration announced an ambitious plan to usher in a new "Space Force" as the sixth branch of the military by 2020.

One of the arguments in favor of developing such a force is that American rivals like China appear increasingly ready to strike US space-based capabilities in the event of a conflict.