Forty-eight people have been killed and 67 injured in a bomb explosion at an education centre in Afghanistan's capital, Kabul, the country's health ministry says. 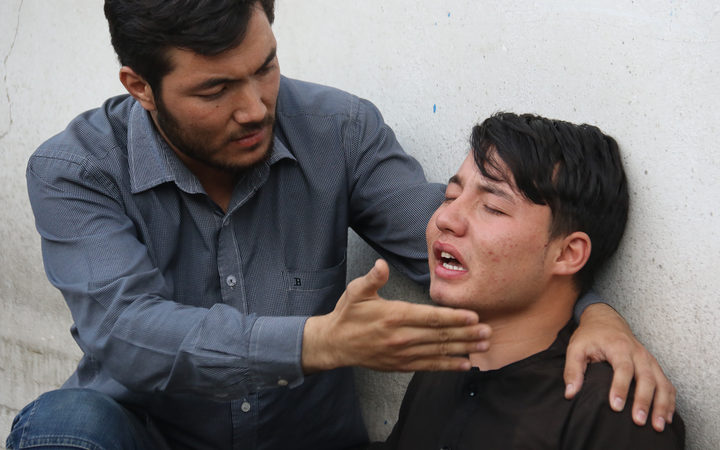 An Afghan resident cries for his relative following a suicide attack in Kabul. Photo: AFP

Police said a suicide bomber walked into the centre while teaching was under way and detonated his bomb belt.

Many of those killed are believed to be teenagers who were getting extra tuition as they prepared for university entrance exams.

The Taliban has denied involvement.

This latest attack came hours after the Taliban said it could no longer guarantee safe passage for Red Cross staff working in Afghanistan, amid a row over the treatment of Taliban prisoners in a jail in Kabul.

The attack on the education centre took place at about 4pm local time in a mostly Shia Muslim neighbourhood of the city.

The Shia community in Afghanistan has been repeatedly targeted by Sunni Muslim extremists of the Islamic State group, which views the Shia practice of Islam as heretical.

"We can confirm the attack was caused by a suicide bomber on foot. The bomber detonated himself inside the education centre," police spokesman Hashmat Stanikzai was quoted as saying by AFP news agency.

A student told AFP that as many as 100 students may have been inside the building at the time.

Another man, who gave his name as Assadullah, told the news agency how he ran toward the blast scene to try and rescue his 17-year-old brother inside.

Meanwhile, local officials said at least nine policemen and 35 soldiers were killed in an attack on a military outpost in the northern province of Baghlan early on Wednesday morning.

Afghanistan has seen a recent upsurge in militant violence, including a major Taliban assault on the eastern city of Ghazni.

At least 100 members of the security forces were killed in the fighting at Ghazni, officials have said.

The UN has warned that as many as 150 civilians may have also been killed.

Tadamichi Yamamoto, the UN's Special Representative for Afghanistan, made an appeal on Wednesday for violence to end.

"The extreme human suffering caused by the fighting in Ghazni highlights the urgent need for the war in Afghanistan to end," he said in a statement.

BBC Pashto journalist Assadullah Jalalzai wrote his account of living three days there under siege before he was able to escape.

After five days of fighting, Afghan security forces have now regained control of the city, with Taliban fighters pulling out.