Washington is bracing for a white nationalist rally organized to coincide with the anniversary of last year's racially charged violence in Charlottesville, Virginia. 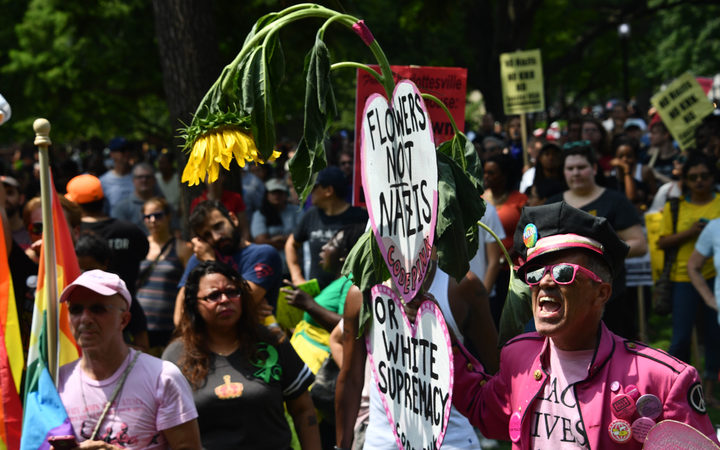 Demonstrators opposed to a far-right rally gather at Lafayette Park opposite the White House. Photo: AFP

The 'Unite the Right 2' event was set to take place at 9.30am (New Zealand time) in Lafayette Square, across the street from the White House.

Several demonstrations by counterprotesters, who were expected to outnumber the white nationalists, are due to be held nearby.

Authorities have promised an enormous police presence to keep both sides apart and avoid the street brawls that broke out last year in downtown Charlottesville. A local woman, Heather Heyer, was killed when an Ohio man, James Fields, drove his car into a crowd of counterprotesters.

At the time, President Donald Trump said there were "very fine people" on both sides, spurring criticism from across the political divide that he was equating the counterprotesters with the rally attendees, who included neo-Nazis and other white supremacists.

Kellyanne Conway, a senior adviser to Trump, said on Sunday that the media was "just not covering" the president's repeated denunciations of white nationalists.

"He's calling for unity among all Americans and he denounced all forms of bigotry and acts of violence and racism," Conway said on ABC's This Week.

Democratic US Representative Elijah Cummings, the top Democrat on the House Oversight Committee, said Mr Trump was not doing enough to disavow racists.

"He has not gone far enough," Cummings said on ABC's This Week.

"I think it's a low bar for the president of the United States to simply say he's against racism. He's got to do better than that. He's got to address the - the people who are spouting racist-type comments and do racial, racist-type acts." 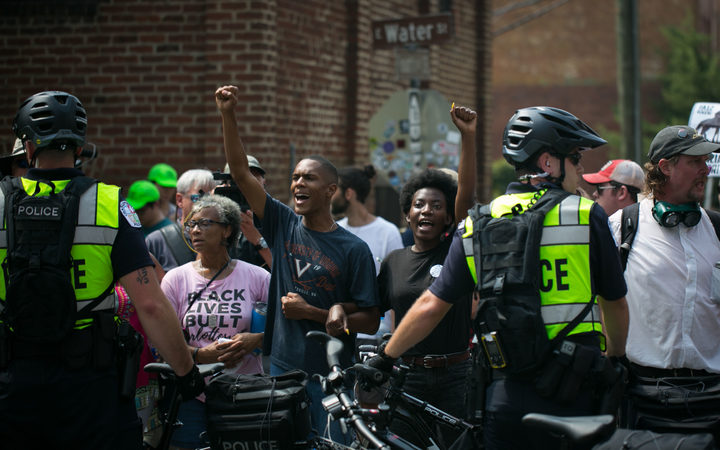 'All hands on deck'

In Washington on Sunday, counterprotesters planned an afternoon program of music, speeches and poetry readings at Freedom Plaza, east of the White House.

Several counterprotesters gathered near the Washington suburban metro station of Vienna, Virginia, where some white nationalists were expected to board trains to take them into the city.

Paul Mitchell, a 62-year-old retired US Parks Police sergeant held a hand-painted sign that reads "No Nazis, no KKK, no racists, no way."

Police used vehicles and traffic cones to seal off the station's parking lot, where about 40 officers in ballistic vests were also deployed.

"It's all hands on deck," Wiedefeld said.

In the picturesque college town of Charlottesville, hundreds of police officers maintained a security perimeter around the normally bustling downtown district throughout the day on Saturday. Traffic was barred from an area of more than 15 city blocks, while pedestrians were allowed access at two checkpoints where officers examined bags for weapons.

Hundreds of students and activists took to the streets on Saturday evening. Many of the protesters directed their anger at the heavy police presence, with chants like "cops and Klan go hand in hand," a year after police were harshly criticized for their failure to prevent the violence.

Earlier on Saturday, a group of anti-fascist protesters walked through the downtown area, holding signs with messages like "Good Night White Pride." But the day was largely free of confrontation.