After banning single use plastic bags, Coles has bowed to customer pressure and will hand out thicker plastic bags free of charge. 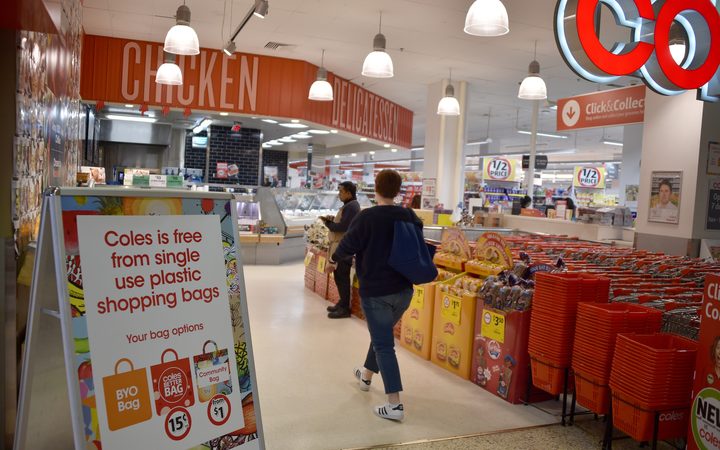 A sign, seen in a Coles supermarket, advises its customers of its plastic bag free in Sydney on July 2, 2018. Photo: AFP

Most state governments in Australia have banned thin single-use bags, and the supermarket giant pledged to phase them out from 1 July.

Now, thicker reusable bags which had previously cost 15 cents each will be handed out for free.

That decision has annoyed environmental groups, who warned the reusable bags are worse for the environment if they are discarded into waterways and habitats.

In a statement today, the supermarket chain said complimentary bags were still an "interim measure" to help customers make the transition to reusable bags.

"Some customers told us they needed more time to make the transition to reusable bags," a Coles spokesperson said.

"We will continue to listen to our customers and our team members on an ongoing basis to assess when customers have become accustomed to bringing their own bags, and will provide them with as much notice as possible," the spokesperson said.

Every state and territory except New South Wales has either outlawed single-use plastic bags, or has plans to ban them.

Woolworths had been giving out an estimated 3.2 billion lightweight plastic bags annually.

"Many customers bringing bags from home are still finding themselves short a bag or two so we are offering complimentary reusable Better Bags to help them complete their shopping," the Coles spokesperson said.

'Coles caved in too quickly'

"Coles have caved in far too quickly to a small but vocal minority and there is absolutely no doubt Coles will be punished for this decision by customers who don't want to see plastic bags littering their beaches and killing marine life," Australia Pacific campaigner Zoe Deans said.

Single-use plastic bags take years to break down, and many end up in the environment polluting oceans, rivers and beaches.

However, if reusable plastic bags reach the oceans and other habitats, they could cause as much if not more damage than single-use bags currently do. 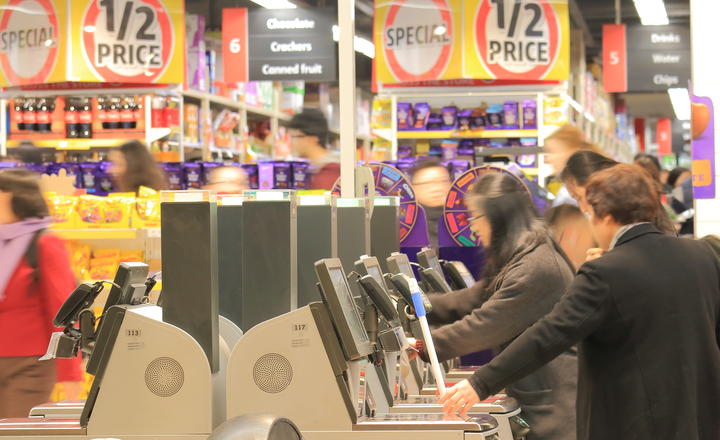 Shoppers at a Coles supermarket in Melbourne. Photo: 123RF

That is because they take longer to break down.

"Coles cannot continue to give away what are now thicker plastic bags which are even more problematic - they can't continue to do that on an ongoing basis and they need to put a cut-off point [to] stop giving them away," he said.

Mr Dee said a previous trial of slightly thicker plastic bags, run by the National Plastic Bag Campaign, showed the number of customers who returned to reuse them was "pathetically low".

"This decision makes a complete mockery of Coles' claim to want to reduce plastic waste and is a betrayal of the millions of their customers who want the supermarket to do the right thing in favour of a vocal minority," Ms Deans said.

"Removing the price means that these reusable bags are far more likely to be used once and discarded."

Co-founder and chief executive of Take 3 for the Sea Tristan Silverwood said the bulk of the population was accepting of the bag ban.

"What we've got at the moment is incredibly ripe environment to take a bold stance on reducing waste and reducing plastic pollution," he said.

"This is happening all over the world and Australia needs to step up the game."

"We now renew our call to Gladys Berejiklian and the State Government to enforce a ban of single-use plastic bags immediately. We also call on the board of Coles to reconsider this decision for the sake of our planet," co-CEO Angus Harris said.

"Also, a public message to Brad Banducci and the team at Woolworths - please don't follow suit."

The controversy around plastic bags comes as customers attacked Coles for giving away toy plastic replicas of some of its grocery products last week.

Coles is handing out a collectable range of 30 mini-products, from Vegemite jars to Tim Tams, as a promotion. It is also selling plastic-lined cases to store them in.

Waste Management Association of Australia said this inconsistency is dangerous.

Leadership by the Federal Government was needed on the issue of plastic bags so companies and consumers knew where they stood, Ms Sloan said.

"I feel like we don't treat consumers with enough respect because I think they really understand we're trying to avoid the creation of waste, avoid the use of plastic," she said.

"We know we use way too much fossil fuel in the creation of plastic, and we actually just need to ban it."

A bit of patience is needed and consumers are capable of changing their behaviours quickly, Ms Sloan said.

"We've seen that with container deposit [schemes] so we should just keep moving forward with certainty and give both the public and industry certainty," she said.