Israel says it has carried out an evacuation of members of Syria's White Helmets civil defence group from a war zone in south-western Syria. 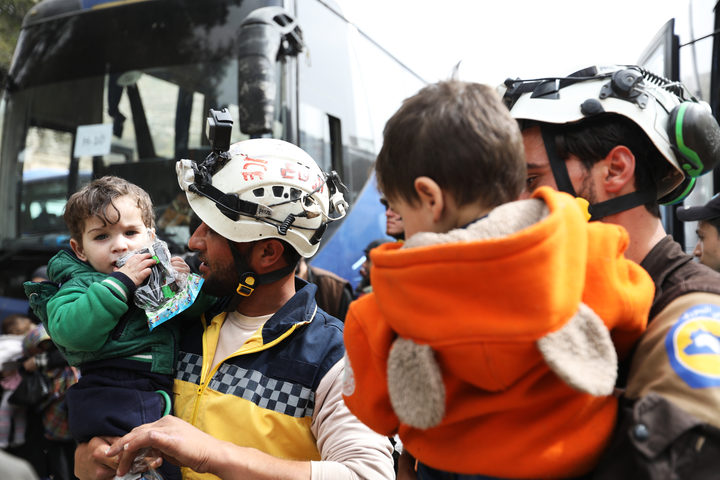 Members of the White Helmets as Syrian civilians and rebel fighters arrived in the village of Qalaat al-Madiq, north of Hama on 24 March 2018 after being evacuated from Harasta in Eastern Ghouta. Photo: AFP

The Israel Defense Forces (IDF) said they had acted on a request from the US and European nations.

Some 800 people were evacuated to Jordan via the Israeli-occupied Golan Heights overnight, Israeli media say.

The White Helmets describe themselves as a volunteer workforce that acts to save people in Syria's war zones.

Although they operate only in rebel-held areas, they say they are non-partisan.

Supporters of President Bashar al-Assad, and his ally Russia, say the White Helmets support the rebels and also have links to jihadist groups.

The evacuated White Helmets had been working in an area controlled by the Syrian opposition in the south-west of the country and had been trapped by a government offensive.

The IDF said they had "completed a humanitarian effort to rescue members of a Syrian civil organisation and their families", saying there was an "immediate threat to their lives".

The civilians were evacuated from the war zone in Southern Syria due to an immediate threat to their lives. The transfer of the displaced Syrians through Israel is an exceptional humanitarian gesture

They said the civilians were transferred "through Israel" and "subsequently to a neighbouring country".

Although Israel is not directly involved in the Syria conflict, the two countries have been in a state of war for decades.

Despite the intervention, the IDF said that "Israel continues to maintain a non-intervention policy regarding the Syrian conflict".

Israeli foreign ministry spokesman Emmanuel Nahshon later confirmed the evacuees were White Helmet members and their families, though neither he nor the IDF named the country receiving the civilians.

However, Jordan's government confirmed it had "authorised the United Nations to organise the passage of 800 Syrian citizens through Jordan to be resettled in Western countries".

It said that "Britain, Germany and Canada made a legally binding undertaking to resettle them within a specified period of time due to 'a risk to their lives'".

Fantastic news that we - UK and friends - have secured evacuation of White Helmets and their families - thank you Israel and Jordan for acting so quickly on our request. The WH are the bravest of the brave and in a desperate situation this is at least one ray of hope

The White Helmet members and their families will be held in a "restricted area" of Jordan.

The Syrian government began a major offensive in June to retake rebel-held areas in the Deraa and Quneitra areas.

Under a number of agreements, rebel forces have been transferred to rebel-held areas in the north of the country, with the Syrian military then moving in to take control.

The latest deal, agreed on Thursday, saw fighters and civilians evacuated from Quneitra province, which borders the Golan Heights.

Who are the White Helmets?