Anti-Kremlin punk band Pussy Riot claimed responsibility for a pitch invasion during the FIFA World Cup final between France and Croatia in Moscow after four people briefly interrupted the game.

The intruders dressed in police-style outfits ran onto the pitch before being hauled off by stewards.

Three people affiliated to anti-Kremlin punk band Pussy Riot ran onto the pitch before being hauled off by stewards. Photo: AFP

They were later detained by police, one of them told Reuters by telephone from a police station near Moscow's Luzhniki stadium, venue for the match.

Three of Pussy Riot's original members were jailed in 2012 for staging a protest against Russian President Vladimir Putin in a church and the group have since become a symbol of anti-Kremlin direct action.

In the second half of the match, three people wearing white shirts with police-style epaulettes, black trousers and police hats ran out onto the pitch from the area behind the French goal. A fourth person tried to run onto the pitch but was tackled on the sidelines.

The three people were able to run about 50 metres, dispersing in different directions, before stewards wearing high-visibility jackets tackled them to the ground and then dragged them off the pitch.

The match was halted, but resumed about 25 seconds later. A witness at the stadium said he had seen police escorting the pitch invaders out of the stadium grounds.

Olga Kurachyova, a member of Pussy Riot, told Reuters by telephone she was one of the pitch invaders, and was being held at Luzhniki police station, near the stadium. She said she could not talk further because police were trying to take her mobile phone away from her. 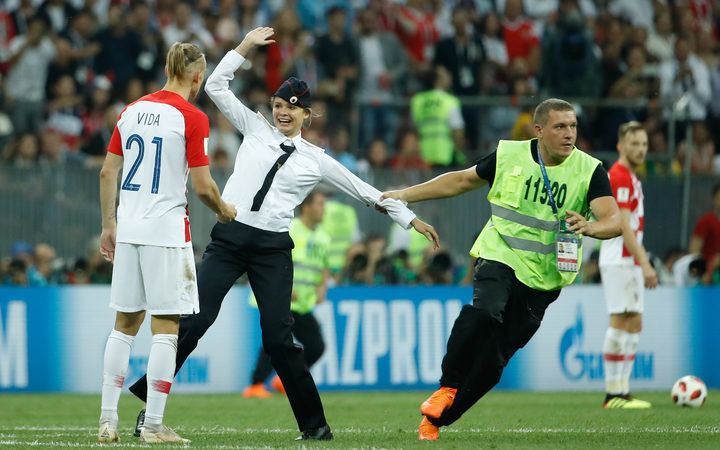 Stewards haul off one of the four pitch invaders. Photo: AFP

Moscow police issued a statement saying that three young women and a young man had been detained after running out on the pitch during the final.

The pitch invasion was the first significant security lapse in the five-week tournament that has won hosts Russia widespread praise for their good organisation and efficiency.

In a post on the Pussy Riot Facebook page, the group said the pitch invasion was intended to bring attention to what they said were human rights abuses in Russia.

They alluded to Oleg Sentsov, a Ukrainian filmmaker jailed for 20 years in 2015 after being found guilty of setting fire to two offices in Crimea, including one belonging to Russia's ruling party, after Moscow annexed the territory from Ukraine.

In the post, Pussy Riot said their demands included freeing political prisoners, freedom of speech on the internet, freedom to protest, and allowing political competition.

Photographs of the pitch invasion indicated that the pitch invaders did not include the three Pussy Riot members who were jailed in 2012 for performing in the church.