Israel says it has struck dozens of Hamas military targets in northern Gaza in retaliation for assaults including more than 90 rocket attacks. 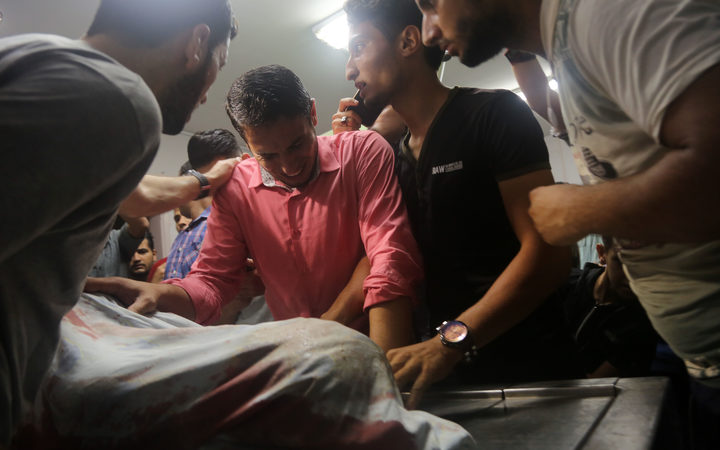 Palestinian health officials said two people were killed and 12 injured in an air strike in Gaza City. Three Israelis were injured by a rocket in Sderot.

Israel's targets included a battalion headquarters and a training facility used by Hamas, its military said.

The operation is one of Israel's broadest since the 2014 war with Hamas.

The Israel Defence Forces (IDF) said it struck facilities used by the militant group, which dominates Gaza, including a battalion headquarters in Beit Lahia, a training camp located in a high-rise building in the al-Shati refugee camp in northern Gaza, weapons storage facilities and rocket launchers.

But witnesses said an Israeli strike had hit an empty building in Gaza City and that the casualties were passersby.

Hamas said another Palestinian had died after being shot by Israeli troops during border protests on Friday.

The IDF said dozens of rockets had been fired on Israel from within Gaza.

Over the last hour, IDF fighter jets targeted dozens of military targets in four Hamas military compounds throughout the Gaza Strip. The focus of the wide-scale strike was a Hamas Battalion HQ in Beit Lahia pic.twitter.com/nDIxRA4ovn

One rocket hit a home in the town of Sderot. Three people suffered shrapnel wounds.

The attacks come amid an escalation of violence in the region in recent months.

They coincided with mass demonstrations along the border which saw thousands of Palestinians express their support for the declared right of Palestinian refugees to return to their ancestral homes in what is now Israel - as well as demanding an end to the blockade of Gaza imposed by Israel and Egypt.

Israel and Egypt said the blockade was a necessary security measure against militants.

Gaza health officials say more than 130 Palestinians were killed and 15,000 others injured by Israeli forces during the protests.

Hamas does not recognise Israel's right to exist but last year said it was ready to accept an interim Palestinian state limited to Gaza and the West Bank.