The former spokesman for US President Donald Trump has described him as "a unicorn, riding a unicorn over a rainbow" in his memoir. 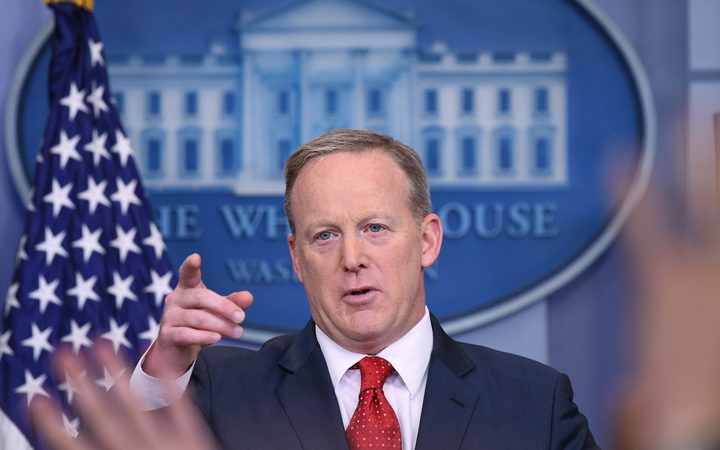 Sean Spicer was the first spokesman of Mr Trump's White House and writes glowingly of the president but also contradicts his assessment of former campaign chairman Paul Manafort.

"I don't think we will ever again see a candidate like Donald Trump," he said.

The Briefing: Politics, the Press and the President is due to be released 24 July and has been praised by Mr Trump.

"His high-wire act is one that few could ever follow," Mr Spicer writes, according to preview excerpts obtained by the Guardian.

"He is a unicorn, riding a unicorn over a rainbow... His ability to pivot from a seemingly career-ending moment to a furious assault on his opponents is a talent few politicians can muster."

The book contradicts Mr Spicer's previous comments about Mr Manafort, who resigned in August 2016 amid allegations he had not declared payments originating in former Soviet countries where he had worked as a political lobbyist.

Mr Manafort was jailed last month and is charged with money laundering, tax fraud, failing to register as a foreign agent, and obstruction of justice.

Mr Spicer said during a White House press conference that Mr Manafort "played a very limited role for a very limited amount of time", echoing Mr Trump's claim that his former campaign chairman had only been with the campaign "for a short period of time".

"Paul brought a much-needed maturity to the Trump campaign," Mr Spicer said, adding that before he joined "there was no semblance of a campaign structure, just a few, distraught, overworked people constantly barking into their phones."

"Paul immediately set up and staffed the political and communications operations necessary to take on the Clinton machine."

Mr Spicer also wrote the US Department of Homeland Security met with the campaign in October 2016 to assure them "that there was no way to infiltrate or manipulate the outcome of a national election", according to the Daily Mail.

However, US intelligence has concluded that Russian hackers targeted Democratic email servers, and committed other cyber-attacks in an effort to aid Mr Trump's campaign.

"Seeming to believe that Clinton would win, they implored us to publicly express confidence in the integrity of the voting process, system, and outcome," writes Mr Spicer