Cave divers in Thailand have extracted four more boys in the second high-risk operation to rescue the football team trapped in a vast flooded cave system. 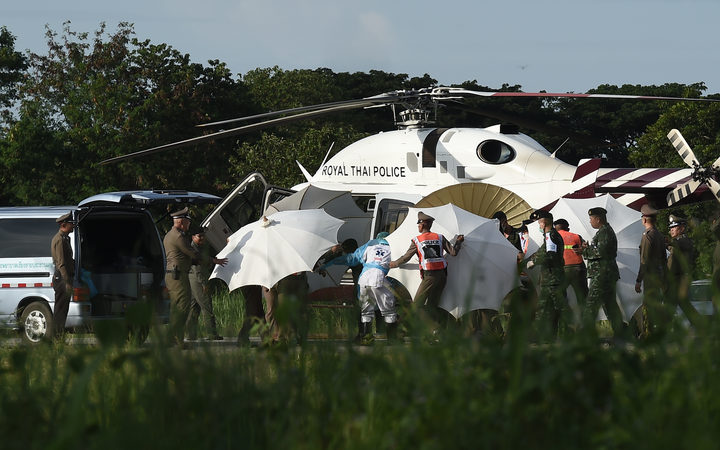 A stretcher being moved from a helicopter on the second day of the rescue. Photo: AFP

A team of Thai Navy SEALS and foreign divers guided four boys on Sunday and a further four on Monday through narrow, submerged channels from the muddy bank deep inside the Tham Luang cave where they had been stranded for more than two weeks.

Read more on the second rescue as it happened.

The boys have not been seen in public, but have been pronounced to be in reasonable health.

There are now five members of the Wild Boar football team now left in the cave.

The rescued boys were treated by medics at the field hospital, and were later airlifted to a larger nearby hospital.

As happened on Sunday, the mission has again been paused overnight for air tanks to be replaced, and for the expert divers involved to recover from the eight-hour return trip into the complex.

The boys became trapped in the cave on 23 June after heavy rains caused flooding, but were found alive last week by divers.

Rescuers decided to go ahead with the operation to free them because of fears that waters would rise again.

The names of the rescued boys have not been released out of respect for the families whose sons were still inside, and they have not been reunited with their own families, he added.

Prime Minister Prayuth Chan-ocha visited the cave to inspect the operation, with navy rescuers giving him a rousing cheer.

Rescuers took advantage of a break in the rain on Sunday to launch the mission earlier than some expected. 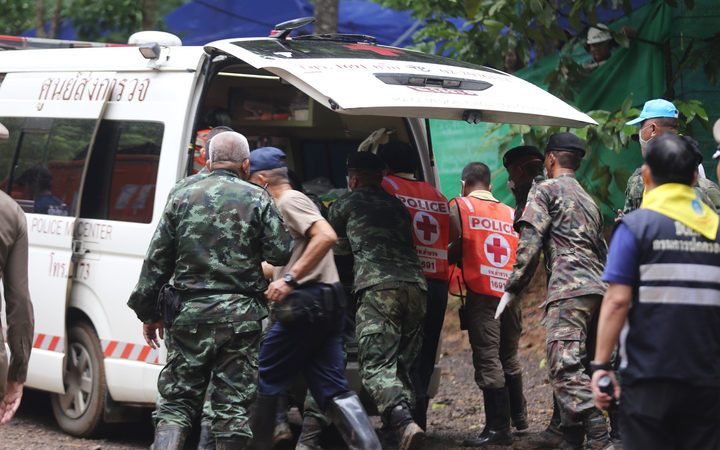 Soldiers and paramedics help a rescued boy on a stretcher to an ambulance outside the Tham Luang cave on the first stage of the rescue. Photo: AFP / Chiang Rai Public Relations Office

The first stage of the mission ran "smoothly" and the rescued boys were in "good health", according to the Thai authorities.

A team of 90 expert divers - 40 from Thailand and 50 from overseas - has been working in the cave system.

They have been guiding the boys through darkness and submerged passageways towards the mouth of the Tham Luang cave system.

Getting to and from where the boys are has been an exhausting round trip, even for the experienced divers.

The process includes a mixture of walking, wading, climbing and diving along guide ropes already in place.

Wearing full-face masks, which are easier for novice divers than traditional respirators, each boy is being accompanied by two divers, who also carry his air supply.

The toughest part is about halfway out at a section named "T-Junction", which is so tight the divers have to take off their air tanks to get through.

Beyond that a cavern - called Chamber 3 - has been turned into a forward base for the divers.

There the boys can rest before making the last, easier walk out to the entrance. They are then taken to hospital in Chiang Rai.

In an indication of how dangerous the journey can be, a former Thai navy diver died in the caves on Friday. Saman Gunan was returning from a mission to provide the group with air tanks when he ran out of oxygen.

He lost consciousness and could not be revived. His colleagues said they would "not let the sacrifice of our friend go to waste".