The death toll from unprecedented rainfall in Japan has risen to at least 76, as widespread flooding forces millions from their homes. 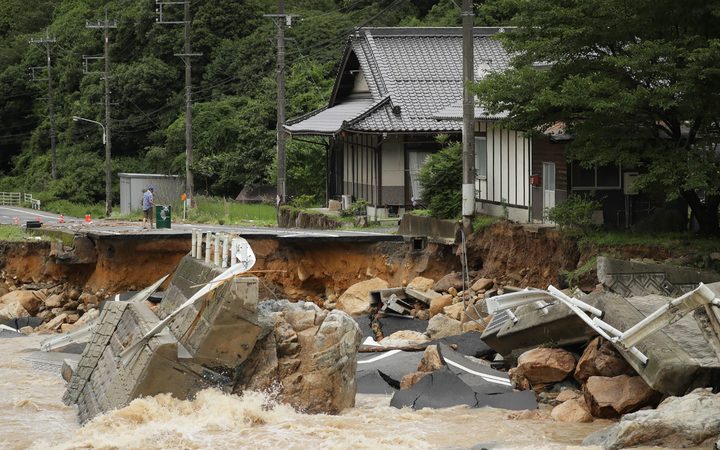 More than 50,000 rescuers have been dispatched across a wide swathe of south-western and western Japan.

Torrential rains have pounded western parts of the country with three times the usual precipitation for this time of the year, setting off landslides and causing rivers to breach their banks.

Flooding and landslides have killed at least 76 people and left dozens missing. Some of the victims have been buried alive by landslides, Japan's Kyodo news agency reports.

Most of the deaths have occurred in Hiroshima prefecture, which has been hit by torrential rain since Thursday. Hundreds of homes have been damaged.

With more heavy rain is forecast to hit some areas for at least another day, almost five million people have been ordered or advised to leave their homes.

Authorities say it could potentially be the worst weather disaster Japan has seen in decades.

Prime Minister Shinzo Abe said the authorities were facing a "race against time" to save people trapped after several days, while also evacuating people at risk from further flooding.

Thousands of police, firefighters and soldiers are taking part in search-and-rescue operations.

In the town of Motoyama, about 600km west of the capital Tokyo, 583mm of rain fell between Friday morning and Saturday morning, Japan's meteorological agency said.

Kyoto, about 300km to the east of Hiroshima, has also been hit by downpours. Local resident Manabu Takeshita told the Japan Times website: "Anybody living near the river has got to be nervous because typhoon season is just really starting."