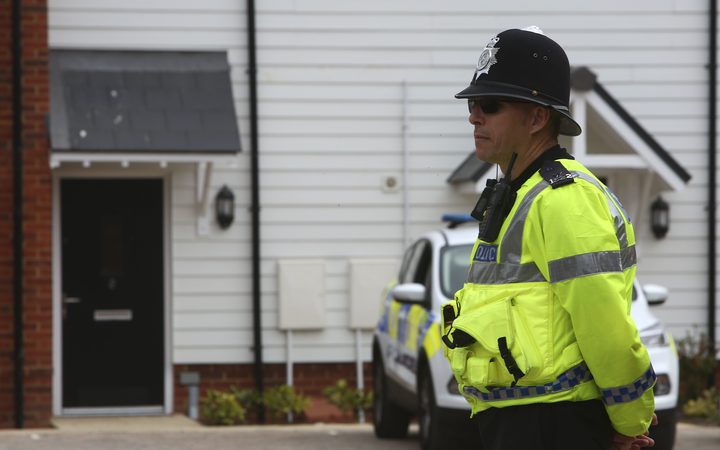 A police officer stands guard outside a residential address in Amesbury, a man and woman were found unconscious. Photo: AFP

The man and woman are in a critical condition in hospital.

The pair, believed to be Charlie Rowley, 45, and Dawn Sturgess, 44, were found unconscious at a house in Amesbury, Wiltshire, on Saturday.

Amesbury is about eight miles from the Salisbury Russian spy poisoning site and police have now confirmed they were exposed to novichok, the same nerve agent was used to poison Mr Skripal and his daughter Yulia in March.

There was "nothing in their background" to suggest the pair were targeted, said police.

No one else has presented with the same symptoms.

Metropolitan Police Assistant Commissioner Neil Basu said it could not be confirmed whether the nerve agent came from the same batch that Mr Skripal, and his daughter Yulia, were exposed to.

The confirmation that the pair came into contact with novichok was confirmed following analysis at the defence research facility at Porton Down.

The government's emergency committee, Cobra, has met in the Cabinet Office at an official level to discuss the events in Amesbury, which is being "treated with the utmost seriousness".

The Met said counter terrorism officers are now working with Wiltshire Police "given the recent events in Salisbury".

Wiltshire Police earlier said it was "open-minded" about the cause after the pair, who are British nationals, were found at the house in Muggleton Road, Amesbury.

Paramedics were called twice to the property, firstly in the morning after Ms Sturgess had collapsed and then later the same day after reports Mr Rowley had also fallen unwell.

While it was not clear whether a crime had been committed, the force said, a number of places in Amesbury and Salisbury known to have been frequented by the couple had been cordoned off. 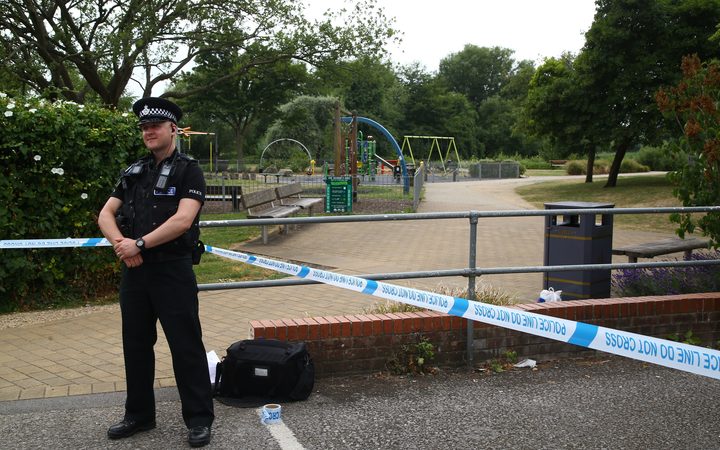 A police officer stands at a cordon at Queen Elizabeth Gardens in Salisbury. Photo: AFP

It said the public can expect to see an increased police presence in and around Amesbury and Salisbury.

"It was initially believed that the two patients fell ill after using possibly heroin or crack cocaine from a contaminated batch of drugs," Wiltshire Police said.

"They are both currently receiving treatment for suspected exposure to an unknown substance at Salisbury District Hospital," it added.

Mr Rowley and Ms Sturgess are believed to have attended a family fun day at Amesbury Baptist Church on Saturday afternoon before they were found unconscious in the property they had just moved into.

Roy Collins, church secretary, said "nobody else has suffered any ill-effects" from attending the community event and "there was nothing going on that was nefarious".

"There have been no reports of any other incidents," he said.

"We are all quite puzzled and shocked - naturally the connection with Salisbury and recent events there mean there is a heightened public interest."

Boots has closed its Amesbury store as "a precautionary measure" to allow police to carry out an investigation, a spokesperson confirmed.

Crews in hazmat suits, which are worn to deal with dangerous or hazardous substances, were sent to the scene in what the fire service described as a "standard procedure response".

Chloe Edwards, a 17-year-old college student who lives near the cordoned-off flat, said she was having dinner when "all these emergency vehicles turned up" and was told to stay inside.

"They were putting on these green suits and we thought it was the gas as our electricity was turned off as well," she said.

"We wanted to know what happened and with the Russian attack happening not long ago we just assumed the worst.

"I am not sure how long they were in there but we couldn't get out of the house for two-and-a-half hours."

Resident Jake Murphy said he was watching the football on Tuesday night when "all these police cars appeared".

"I didn't know what was happening," he said.

Justin Doughty, who lives opposite the police cordon, said none of the residents have been "told anything by the police".

"We would have thought the police would have been more forthcoming and keep us in the loop."

A government source said: "Senior Whitehall officials are being kept informed of what is going on on the ground as we seek to establish the facts of this case.

"No definitive conclusions have yet been established."

Wiltshire's Police and Crime Commissioner Angus Macpherson said the police had worked hard at "containing any risk that might be there".

"There's no reason to think it's connected with matters of last month," he said.

"I haven't seen anything in this incident yet that I would consider to be an overreaction in terms of previous incidents, it all seems fairly textbook."

Public Health England said it did not believe there was a "significant health risk" to the wider public, although its advice was being continually assessed.

The hospital was "open as usual" and advised patients to attend routine appointments unless contacted and advised to do otherwise.