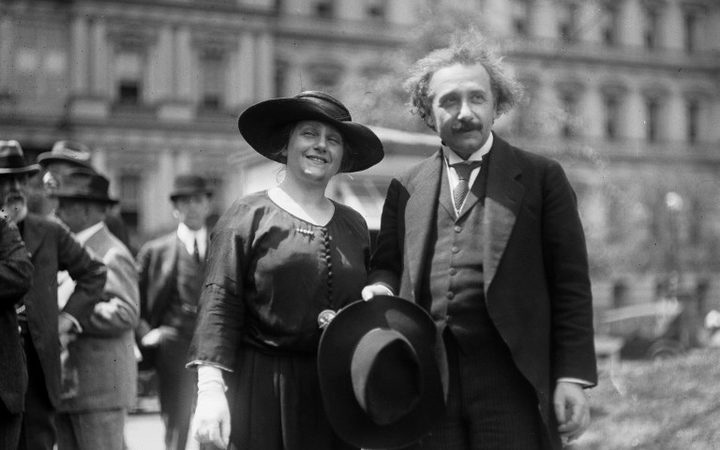 Written between October 1922 to March 1923, the diaries track his experiences in Asia and the Middle East.

In them, he makes sweeping and negative generalisations, for example calling the Chinese "industrious, filthy, obtuse people".

Mr Einstein would later in life advocate for civil rights in the United States, calling racism "a disease of white people".

This is the first time the diaries have been published as a standalone volume in English.

Published by Princeton University Press, The Travel Diaries of Albert Einstein: The Far East, Palestine, and Spain, 1922-1923 was edited by Ze'ev Rosenkranz, assistant director of the California Institute of Technology's Einstein Papers Project.

Mr Einstein travelled from Spain to the Middle East and via Sri Lanka, then called Ceylon, on to China and Japan.

The physicist described arriving in Port Said in Egypt and facing "Levantines of every shade... as if spewed from hell" who come aboard their ship to sell their goods.

He also described his time in Colombo in Ceylon, writing of the people: "They live in great filth and considerable stench down on the ground, do little, and need little."

But the famous physicist reserved his most cutting comments for Chinese people.

According to a piece in the Guardian about the diaries, he described Chinese children as "spiritless and obtuse", and calls it "a pity if these Chinese supplant all other races".

In other entries he called China "a peculiar herd-like nation," and "more like automatons than people", before claiming there was "little difference" between Chinese men and women, and questioned how the men were "incapable of defending themselves" from female "fatal attraction".

Noted for both his scientific brilliance and his humanitarianism, Mr Einstein emigrated to the US in 1933 after the rise of Adolf Hitler and the Nazi party.

The Jewish scientist described racism as "a disease of white people" in a 1946 speech at Lincoln University in Pennsylvania.