A top US White House advisor has accused Canadian Prime Minister Justin Trudeau of stabbing the US in the back.

It follows a chaotic G7 summit in Quebec at the weekend, when US president Donald Trump withdrew his endorsement of a joint communique, accusing Mr Trudeau of being "dishonest and weak". 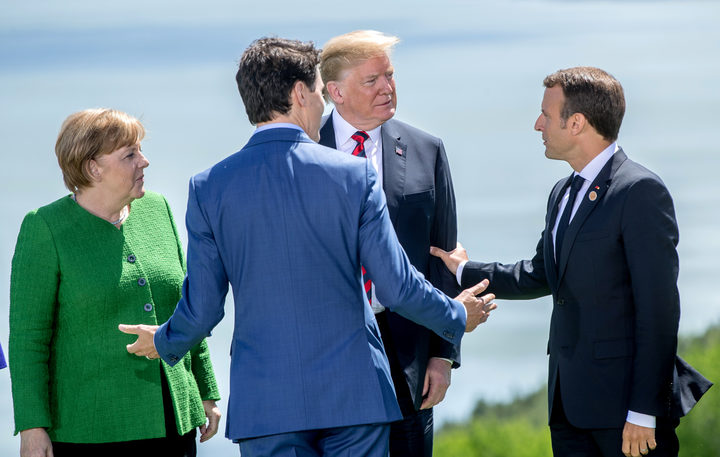 "He really kind of stabbed us in the back," Mr Kudlow told US media.

Another US trade adviser, Peter Navarro, said: "There is a special place in Hell for any leader that engages in bad faith diplomacy with President Donald J Trump and then tries to stab him in the back on the way out the door."

Mr Trudeau's office responded by saying he had "said nothing he hasn't said before - both in public, and in private conversations with the president" and vowed to abide by the G7 final communique.

In a news conference after the summit, the Canadian leader had reasserted his opposition to the US tariffs, and vowed to press ahead with retaliatory moves on 1 July.

"Canadians are polite and reasonable but we will also not be pushed around," he said.

Mr Trump responded by tweeting en route to his next summit, in Singapore, that he had instructed US officials "not to endorse the communique as we look at tariffs on automobiles".

He said the move was based on Mr Trudeau's "false statements ... and the fact that Canada is charging massive tariffs to our US farmers, workers and companies".

Other G7 partners also seemed stunned by Mr Trump's reaction, and pledged to support the communique.

"Let's be serious and worthy of our people. We make commitments and keep to them," a statement from the French presidency quoted by AFP news agency said.

German Foreign Minister Heiko Maas said: "In a matter of seconds, you can destroy trust with 280 Twitter characters."

The G7 statement had sought to overcome deep disagreements, notably over trade.

In the communique after the summit in La Malbaie, Quebec province, the group of major industrial nations - Canada, the US, the UK, France, Italy, Japan and Germany - had agreed on the need for "free, fair, and mutually beneficial trade" and the importance of fighting protectionism.

Other agreements reached include: