Memes, remixes and other user-generated content could disappear online if the EU's proposed rules on copyright become law, warn experts. 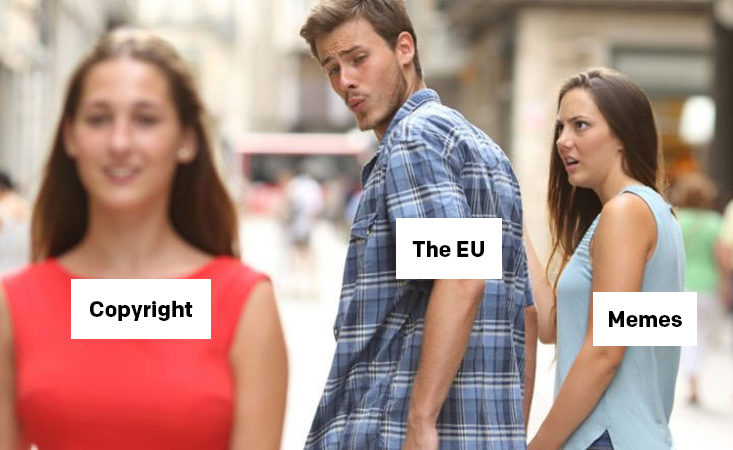 Digital rights groups are campaigning against the Copyright Directive, which the European Parliament will vote on later this month.

The legislation aims to protect rights-holders in the internet age.

But critics say it misunderstands the way people engage with web content and risks excessive censorship.

The Copyright Directive is an attempt to reshape copyright for the internet, in particular rebalancing the relationship between copyright holders and online platforms.

Article 13 states that platform providers should "take measures to ensure the functioning of agreements concluded with rights-holders for the use of their works".

Critics say this will, in effect, require all internet platforms to filter all content put online by users, which many believe would be an excessive restriction on free speech.

There is also concern that the proposals will rely on algorithms that will be programmed to "play safe" and delete anything that creates a risk for the platform.

A campaign against Article 13 - Copyright 4 Creativity - said that the proposals could "destroy the internet as we know it".

"Should Article 13 of the Copyright Directive be adopted, it will impose widespread censorship of all the content you share online," it said.

It is urging users to write to their MEP ahead of the vote on 20 June.

Jim Killock, executive director of the UK's Open Rights Group, told the BBC: "Article 13 will create a 'Robo-copyright' regime, where machines zap anything they identify as breaking copyright rules, despite legal bans on laws that require 'general monitoring' of users to protect their privacy.

"Unfortunately, while machines can spot duplicate uploads of Beyonce songs, they can't spot parodies, understand memes that use copyright images, or make any kind of cultural judgement about what creative people are doing. We see this all too often on YouTube already.

"Add to that, the EU wants to apply the Robocop approach to extremism, hate speech, and anything else they think can get away with, once they put it in place for copyright. This would be disastrous."

The Electronic Frontier Foundation and 56 other rights organisations sent an open letter to European lawmakers in October outlining their concerns about Article 13.

"Article 13 appears to provoke such legal uncertainty that online services will have no other option than to monitor, filter and block EU citizens' communications if they are to have any chance of staying in business," it read.