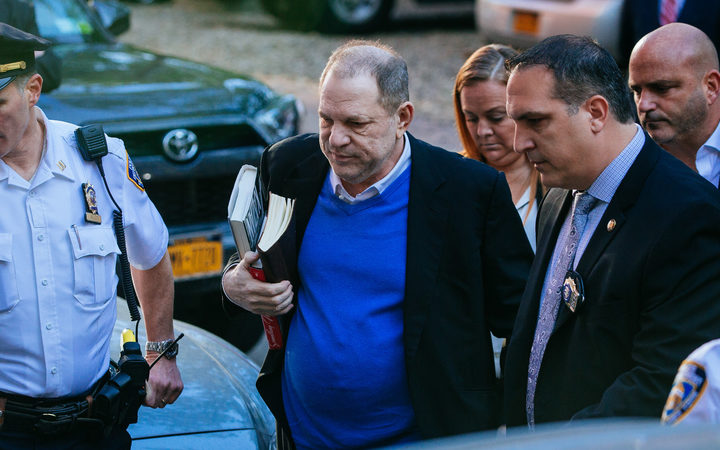 Harvey Weinstein turns himself in to the New York Police Department's First Precinct after being served with criminal charges by the Manhattan District Attorney's office on May 25, 2018 in New York City. Photo: AFP

Mr Weinstein turned himself in to police in the city earlier in the day.

Dozens of women have made allegations against the 66-year-old, including rape and sexual assault, and giving rise to the #MeToo movement.

Mr Weinstein has denied committing any non-consensual sex acts. He is now out on bail, wearing a monitoring device.

He arrived at the police station in lower Manhattan at 07:30 (11.30pm NZT) on Friday, carrying three books. After having his mugshot and fingerprints taken, he was led out in handcuffs and taken to court.

During a brief court appearance, during which Mr Weinstein did not speak, prosecutor Joan Illuzzi said the former mogul had "used his position, money and power to lure young women into situations where he was able to violate them sexually".

Mr Weinstein was released on a $1m bail bond. His lawyer Ben Brafman told reporters outside the court the disgraced mogul would enter a not guilty plea.

In its statement, the New York Police Department thanked "these brave survivors for their courage to come forward and seek justice".

Details of those making the accusations have not yet been officially released, but former actress Lucia Evans, who said Mr Weinstein forced her into oral sex in 2004, is thought to be one of the women whose cases triggered the charges.

These are the first criminal charges against Mr Weinstein, who already faces a raft of civil lawsuits.

The actress Rose McGowan, who accused Mr Weinstein of rape, told the BBC it had been an "amazing day for his survivors".

"It's a very significant moment, it's a concrete slap in the face of abuse of power," she said. "It's just the beginning of that process and if we can see this through to the end, I hope we emerge victorious."

The allegations against the disgraced mogul triggered the #MeToo movement, which sought to demonstrate and draw attention to the widespread prevalence of sexual abuse and harassment.

Who else has accused Mr Weinstein?

The Hollywood mogul has faced accusations of sexual harassment and assault from dozens of women. Some have alleged rape. Actresses Kate Beckinsale, Lysette Anthony and Gwyneth Paltrow are among the high-profile figures to have spoken out.

Actress Ashley Judd is suing the Hollywood producer, claiming he damaged her career after she rejected his sexual advances.

One of the cases was in New York, where Italian model Ambra Battilana accused Mr Weinstein of groping her in 2015. Investigators decided not to charge him even though there was an audiotape of Mr Weinstein accepting he had touched Ms Battilana's breasts and pledging not to do so again.

Prosecutors in Los Angeles are reviewing several cases involving accusations against Mr Weinstein after police investigations, and London's Metropolitan Police are also assessing a sexual abuse allegation against him.

Mr Weinstein was fired last year from his production firm, the Weinstein Company, which later filed for bankruptcy. He has been condemned by top industry figures, and the organisation behind the Oscars expelled him from its membership.

The Weinstein case and #MeToo

The #MeToo campaign against sexual harassment and abuse swept through Hollywood last autumn, in the wake of the accusations against Mr Weinstein.

The movement was prompted by an invitation from actress Alyssa Milano on Twitter, asking those who had been sexually harassed or assaulted to reply "Me Too". She received half a million responses in 24 hours.

"Me Too" began as an idea back in 2006, with rights activist Tarana Burke, who used it as the name for a group to help those who had been sexually harassed and assaulted.

In January, more than 300 actresses, writers and directors launched the Time's Up project, raising $21m in just a month to fund legal assistance for people who suffer harassment, abuse or assault at work.

A number of high-profile figures in entertainment have been accused since the Weinstein story. On Thursday US film star Morgan Freeman apologised following allegations of sexual misconduct.