Adelaide Catholic Archbishop Philip Wilson, who is facing up to two years in jail for covering up child sexual abuse, says he will stand aside from his duties, but will not resign unless it becomes "necessary or appropriate". 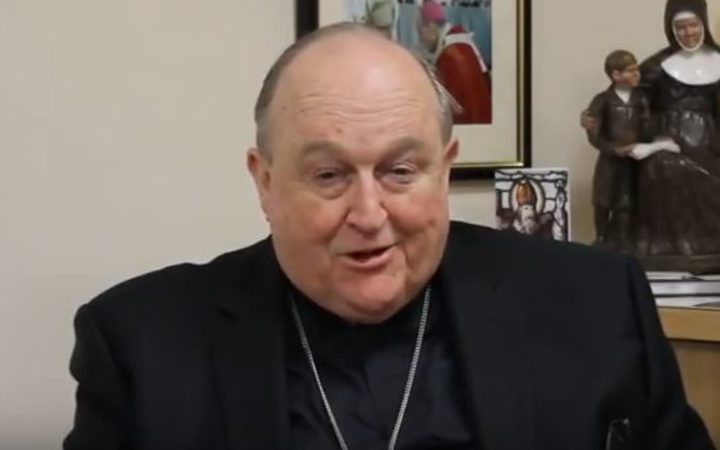 Wilson is under mounting pressure to quit the role and today released a statement saying he would step down from his duties on Friday.

"It is appropriate that, in the light of some of his Honour's findings, I stand aside from my duties as Archbishop," he said.

"I am now putting in place the necessary administrative arrangements to ensure that the affairs of the Archdiocese are managed responsibly. I therefore intend to step aside as of Friday this week once those arrangements are in place."

But he has stopped short of resigning, saying he would only consider that option if he had to.

"If at any point in time it becomes necessary or appropriate for me to take more formal steps, including by resigning as Archbishop, then I will do so," he said.

Wilson was convicted yesterday and is facing possible jailtime for not reporting paedophile priest Jim Fletcher to authorities in the 1970s.

The case is now being treated as a landmark judgment, with lawyers predicting it could trigger prosecutions over other sex abuse cover-ups within the church.

In his statement, he offered his "best wishes" to the "Catholic faithful", and said he wanted to "assure everyone that the affairs of the Archdiocese will be appropriately managed in my absence".

The Truth, Justice and Healing Council - which was set up by the church to respond to the royal commission into child sexual abuse - had earlier suggested Wilson's position was untenable.

"It's pretty obvious that he should stand down," chief executive Francis Sullivan told ABC Radio Adelaide.

"Obviously Archbishop Wilson has his own legal rights to consider but he knows full well that in the Catholic Church, even when someone is facing allegations in this area, they step aside from their duties.

"The Catholic Church leadership needs to demonstrate that it's not going to be business as usual, that the royal commission and other findings are going to be taken seriously and implemented."

Veteran US journalist Walter Robinson, who ran Boston Globe's famed "Spotlight Team" in the early 2000s, has called for Wilson and other guilty clergy to be "thrown in prison".

Father Frank Brennan, who chairs Catholic Social Services Australia, said it was important for the church's reputation that Wilson made the right decision.

"He should remain standing aside from all episcopal roles, whether local or national, unless and until any appeal court were to quash the conviction," he said.

"The royal commission has made it very clear that what we want is transparency and that has been made very clear within our church."

Following the verdict, the Archbishop released an initial statement that said he was considering his position.

One caller to ABC Radio Adelaide who sits on the board of a Catholic school said the diocese was shocked that Wilson did not step aside immediately.

"The statement from the Archbishop - we're all just really stunned that that didn't contain a resignation. His position is untenable," she said.

"My kids are preparing for their sacraments at the moment, their communion and confirmation, and they then see that the head of the Catholic church in South Australia has been convicted for something like this. That's really hard to explain to them.

"It's not what we as young Catholic families want our contemporary church to be."

Greens senator Sarah Hanson-Young called for stronger laws against those who cover up sexual abuse.

"It was a recommendation of the royal commission - we need to move on that quickly," she said.

"The Federal Government should come out today and say they're going to move to uniform laws to ensure that hiding, covering up, concealing child abuse is unacceptable."