Two new fissures, including one 300 metres long, have opened up on Hawaii's Big Island as the Kilauea volcano shows no sign of letting up. 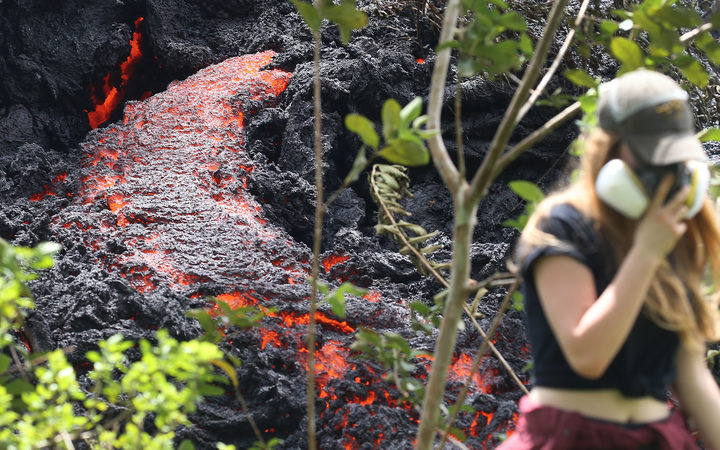 A Pahoa resident walks near one of the 18 fissures that have opened up on the flanks of Kilauea volcano Photo: AFP

The number of fissures that have opened up on the volcano's eastern flank and in the Leilani Gardens residential area now stands at 18.

Molten lava and poisonous gases are spewing through the fissures and fresh evacuations have been ordered.

Kilauea, one of the world's most active volcanos, erupted eight days ago, destroying dozens of homes and forcing the evacuation of tens of thousands of people.

One of the fissures, which was hurling bursts of rock and magma with an ear-piercing screech, opened within a zone where authorities had just ordered an evacuation.

From a helicopter, the crack appeared to be about 300 metres long and among the largest of those fracturing the side of Kilauea.

Resident Mark Clawson, 64, who lived uphill from the new fissure and was so far defying the evacuation order, said the noise was "a near-constant roar".

"[It's] akin to a full-throttle 747 interspersed with deafening, earth-shattering explosions that hurtle 100-pound [45kg] lava bombs 100 feet [30 metres] into the air," he said.

"We are keeping track of lava bombs. One went through the lanai [porch] roof of a neighbor's house.

About eight to 10 people in the neighborhood had stayed in their homes, he said.

The lava flow was "sluggish," she said.

A pair of structures sat about 90m beneath the new fissure on the hillside.

One stucture had been destroyed, the Honolulu Star-Advertiser reported, making it the 37th structure lost since 3 May.

Meanwhile, other fissures continued to billow smoke over homes in Pahoa, on the western point of the Big Island.