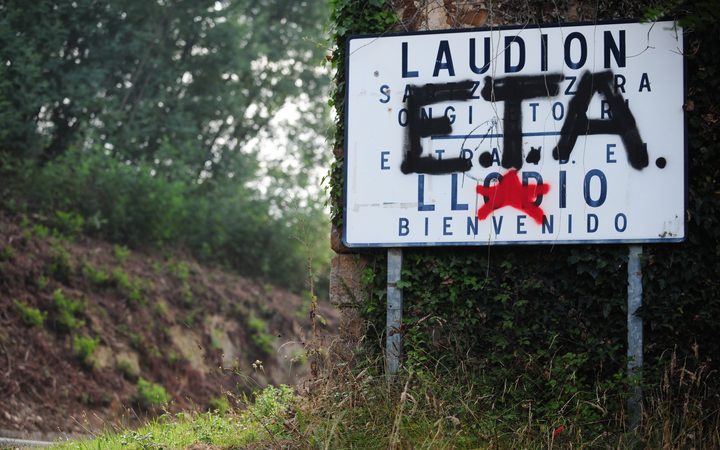 Graffiti in favour of Basque armed group ETA covers a sign welcoming visitors to the Northern Spanish Basque village of Llodio on 6 September 2010. ETA announced it was fully disbanding in a letter on May 2, 2018. Photo: AFP PHOTO / Rafa RIVAS

A ceremony is set to take place later this week in the town of Cambo-les-Bains, in south-west France.

The group, which for 50 years has fought a guerrilla campaign for independence from Spain, said it had completely dismantled all its structures.

Deemed a terrorist organisation by the European Union, Eta is believed to have killed more than 800 people between 1968 and 2010 before it announced a permanent ceasefire in 2011.

While Eta's days may be over, nearly half the killings attributed to the organisation have still not been fully investigated. There are many Basques, on both sides, who believe there are still issues to be resolved before true peace can be established.

The majority of attacks took place in the Basque region of northern Spain and neighbouring Navarre. 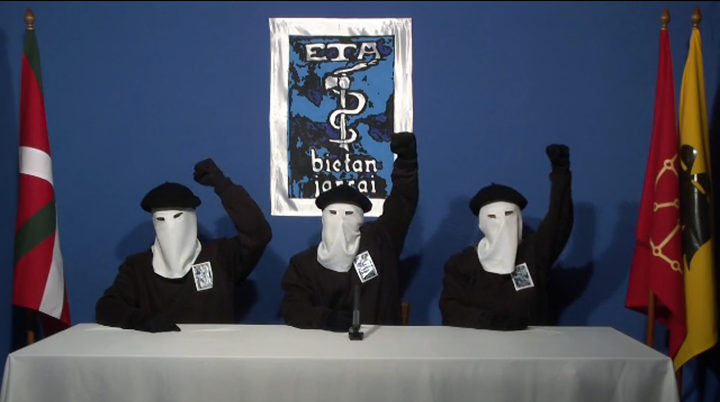 A total of 443 civil guards and police died at Eta's hands, according to Europa Press news agency, which reported that 58 businesspeople and 39 politicians were also among its victims.

The terrorism victims' group Dignidad y Justicia (Dignity and Justice) says that nearly 400 deaths caused by Eta remain unresolved and it has called on the authorities to reopen the cases.

"For us there will be no end of Eta as long as there is not justice for all," the president of Dignidad y Justicia, Daniel Portero, told the European Parliament last year.

Several dozen Spanish intellectuals and relatives of victims of Eta have presented a petition on Change.org calling on the group to offer information about its unresolved crimes and criticising what the signatories called its attempts to "whitewash" its crimes.

However, a report commissioned last year by the region's government led by the Basque Nationalist Party (PNV) documented over 4000 alleged cases of torture by the security forces in relation to Eta between 1960 and 2014. Only 20 torture cases have seen court sentences.

The Spanish government also intentionally keeps most of the 243 Eta members in national jails far from their families as part of a so-called "dispersion policy".

In April 2017 Eta staged a disarmament ceremony in the south of France, and in a letter to various Basque organisations last month it said it wanted to building a future from a new starting point.

The letter highlighted "a new opportunity definitively to end the cycle of conflict" and acknowledged the "suffering caused as a result of its struggle".

However, it said its dissolution did not bring an end to the conflict between the Basque homeland and Spain and France.

"Years of confrontation have left deep wounds and we have to give them the chance to heal. Some are still bleeding, because the suffering is not in the past."

So far, Eta's moves away from violence have failed to impress the Spanish government, which has presented the group's ceasefire, disarmament and now disbandment as a drawn-out admission of defeat.

After so many decades of bloodshed, Eta has little to show for its campaign.

The Basque region has more autonomy than any of Spain's other 16 regions, with its own police force, education system, language and a special financial relationship with Madrid.

However, these powers were granted to the region by the 1978 constitution, rather than as a result of Eta's actions.

In contrast with Catalonia, where support for secession is close to 50 percent and nationalist parties held a banned referendum last October, support for independence within the Basque country is currently around 15 percent, according to polls.