Ten people have been killed and 15 injured after a man drove a van into pedestrians in Toronto, police said. 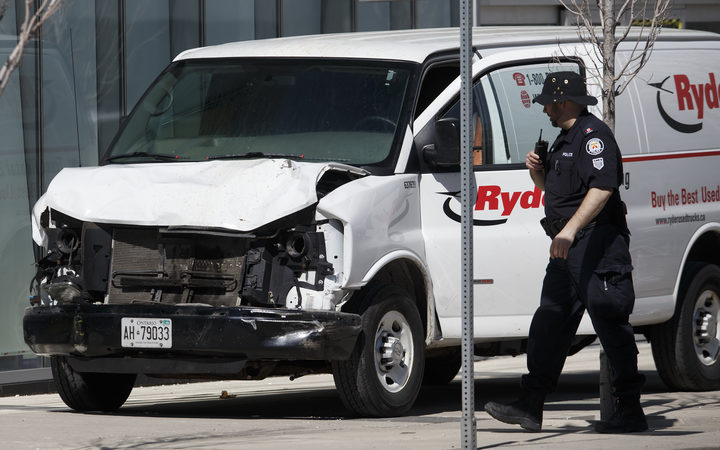 Police inspect a van which mounted the pavement and hit a crowd of pedestrians in Toronto. Photo: AFP

The driver fled the scene of the incident, at a busy intersection in the north of the Canadian city.

He was arrested several blocks away and taken into custody.

Toronto police have confirmed the suspect is Alek Minassian, but authorities said they had not yet established a motive for the apparent attack.

Local police have now confirmed that 10 people have died and 15 suffered injuries.

Toronto Police said on Twitter they were called to the busy Yonge Street and Finch Avenue East intersection about 1.27pm local time.

At least seven people were brought to nearby Sunnybrook Health Services Centre's trauma center, the hospital said on Twitter.

A New Zealand journalist living in Toronto, Laura McQuillan, told Morning Report there were photos from the scene of the driver having been arrested, and said photos showed the driver, a man, was seen holding an object - possibly a cellphone - before his arrest.

She said it was in North York, which was just north of Toronto's downtown right at the lunch break on one of the first sunny days since winter. 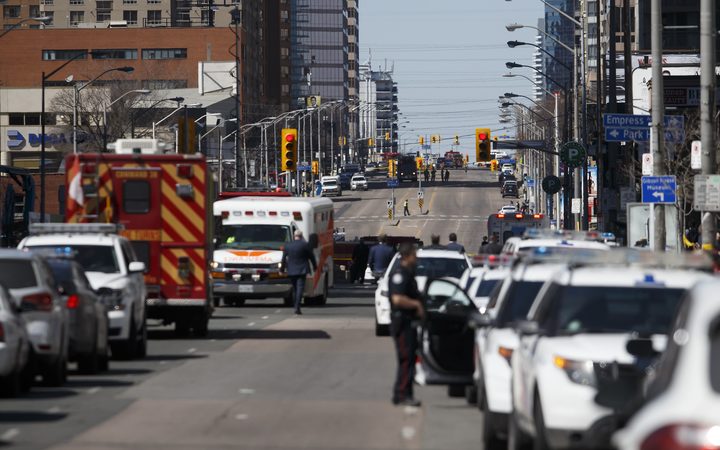 The scene in Toronto where a van plowed into pedestrians. Photo: AFP

Vehicle rental and transportation logistics company Ryder System confirmed one of its vans was involved in the incident and said it was cooperating with the authorities.

Yonge Street is large, divided boulevard at the point where the incident occurred, its center meridian dotted with planter boxes and sculptures.

Police said they closed the intersection because of the collision. Nearby subway services were halted.

One orange bag, which appeared to contain a body, was seen being loaded on to an ambulance.

No description was given of the driver, including name, age, gender, or possible motive.

"Our hearts go out to anyone affected. We're obviously going to have more to learn and more to say in the coming hours."

Canada's Minister of Public Safety Ralph Goodale said there "have clearly been casualties" and that it was a "very serious" situation but gave no further details on possible deaths of injuries.

He said no information at the present time indicated a need to change the security risk level.

Speaking in broken English, one witness told local media: "I saw there's a white truck just go to the sidewalk and so many people just are shouting, 'stop the car!'

"But he just keep moving and he hit some people and three people lie down there and they didn't move at all."

One witness told City News that the driver, whom he identified as a man, was driving on the kerb "hitting anything that comes in the way".

"People, fire hydrants, there's mail boxes being run over," said the unnamed man, who said he was driving behind the van during the incident.

As the van continued, the man said he honked his horn to try to warn pedestrians.

"I witnessed at least six, seven people being hit and flying in the air, like killed, on the street," he said.

It looked like something from "a movie", he added.

The incident happened about 30km from downtown, where the Group of Seven meeting between the foreign ministers of Canada, the United States, Britain, France, Germany, Italy, and Japan was set to take place.

There was no noticeable change in security around the Intercontinental Hotel where the ministers gathered.