Starbucks executive chairman has said he is "embarrassed" by the recent accusations of racial profiling in the company's US cafes. 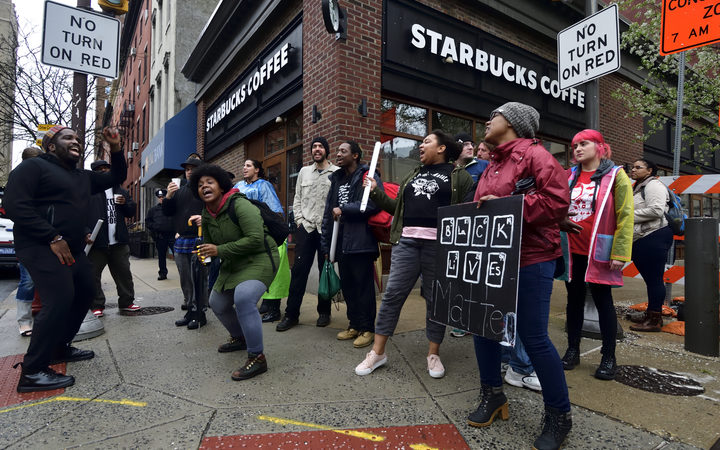 Protesters gather on April 16, 2018 for a protest at the Starbucks location in Center City Philadelphia. Photo: AFP

Howard Schultz's comments came after Starbucks announced it will close US stores on 29 May for company-wide "racial bias training".

The initiative is in response to the arrest of two black men for trespassing at a Philadelphia Starbucks last week.

The two men were waiting for a friend when the manager called the police.

"I think what occurred was reprehensible at every single level," Mr Schultz told CBS News on Wednesday.

"The announcement we made yesterday about closing our stores, 8,000 stores closed, to do significant training with our people is just the beginning of what we will do to transform the way we do business and educate our people on unconscious bias."

The former Starbucks chief executive added that the firm is working with the NAACP and Equal Justice Initiative to assist company efforts to reduce unconscious bias in employees.

"There's no doubt in my mind that the reason that they [police] were called was because they were African American," he said. "That's not who Starbucks is."

The coffee company has since apologised over the incident as protesters called for a boycott of Starbucks.

Mr Schultz said that the two black men from Philadelphia might also be working with Starbucks in the future.

According to Schultz, the store manager who called the police has said she is "interested" in speaking with the two men. He added that this could be a "unique opportunity" to reconcile.

"Perhaps something good can come out of this and by that I mean, this has highlighted for us that we have more work to do as a company."

Days after Starbucks apologised to the Philadelphia men, mobile phone footage emerged of an apparent race-related incident in a Starbucks store in California.

Brandon Ward, a black Starbucks customer in Torrance in southern California, posted a video on social media purporting to show an incident in January, in which he was barred from using a toilet - despite being a paying customer - while a white man who hadn't bought anything was allowed to use the facilities.

Mr Schultz told CBS it was possible that the Philadelphia incident was not "isolated" and the company would continue to examine its policies.

In 2015 a Starbucks public relations campaign to encourage customers to discuss issues of race backfired, when the company's big roll-out was widely mocked.

Launching the "Race Together" campaign, Starbucks had said it wanted to engage customers in a conversation about race amid protests about policing of African-American communities.

It involved baristas scribbling the words "Race Together" on cups and attempting to "engage customers in conversation through Race Together stickers available in select stores", Starbucks said.

But instead the hashtag #racetogether was hijacked on social media and the campaign became the subject of widespread criticism.