Cuba's vice-president, Miguel Díaz-Canel, has been named by officials as the country's next leader - to replace Raul Castro. 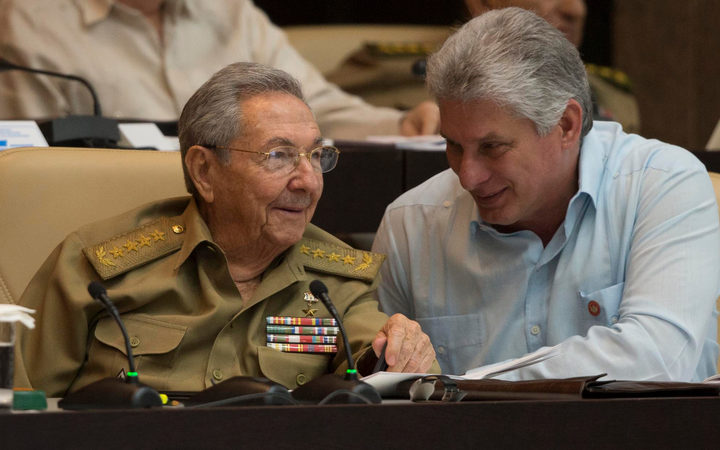 Raul Castro (L) talks with Miguel Diaz-Canel during the First Annual Session of the Cuban Parliament at the Convention Palace in Havana. Photo: AFP

The handover of power will bring to an end nearly six decades of rule by Mr Castro and his late brother Fidel.

Raúl Castro took over as president from his ailing brother Fidel in 2006.

Raúl Castro is expected to remain a powerful influence in the communist state even after he steps down.

Mr Díaz-Canel will inherit a country in economic stagnation and with a young population impatient for change, BBC Cuba correspondent Will Grant reports.

There is also the complex task of leading without the same revolutionary past as the predecessors.

He may have had a relatively low profile when he was first appointed vice-president of Cuba's Council of State in 2013 but he has since become Raúl Castro's right-hand man.

For the past five years, he has been groomed for the presidency and the handover of power. But even before being named first vice-president, the 57-year-old had already had a long political career.

He was born in April 1960, little over a year after Fidel Castro was first sworn in as prime minister.

He studied electrical engineering and began his political career in his early 20s as a member of the Young Communist League in Santa Clara.

While teaching engineering at the local university, he worked his way up the ranks of the Young Communist League, becoming its second secretary at the age of 33.

Mr Díaz-Canel is unlikely to make any major changes in the short term, especially as long as Mr Castro remains a political force to be reckoned with.

Any changes are likely to be gradual and slow-paced. Having said that, Raúl Castro did bring in reforms after he took over as president, most strikingly the thaw in relations with the US which had seemed unthinkable under his brother Fidel.

The new leader will have to consider how to overcome the problems caused by the economic collapse of Cuba's ally, Venezuela, and what kind of relationship the Caribbean island wants with the US under Donald Trump.

But what most Cubans will judge the Mr Díaz-Canel on is whether their day-to-day lives improve.

Some Cubans were pessimistic about their lives improving with a change in government.

"Right now, we don't know what the future holds," said Adriana Valdivia, 45, a teacher in Havana. "Raul is finished and Fidel is history."

"I can't see a way out to help Cubans live better, salaries are the same and don't make ends meet, and now Trump is tightening the screws with the blockade, imagine that," said Valdivia, who earns about $US24 ($NZ38) a month.

Many Cubans say they feel distant from politics, preferring to focus on making ends meet within the limited economic opportunities that opened as Mr Castro allowed more small businesses in recent years.

"Politics is not my strong point," said Diadenis Sanabria, 34, working in a state-owned restaurant in Havana's Vedado district.

"But I don't think a change of chief is going to change my life."