A woman has been killed and seven others needed medical treatment after an engine on a US passenger jet apparently exploded in midair. 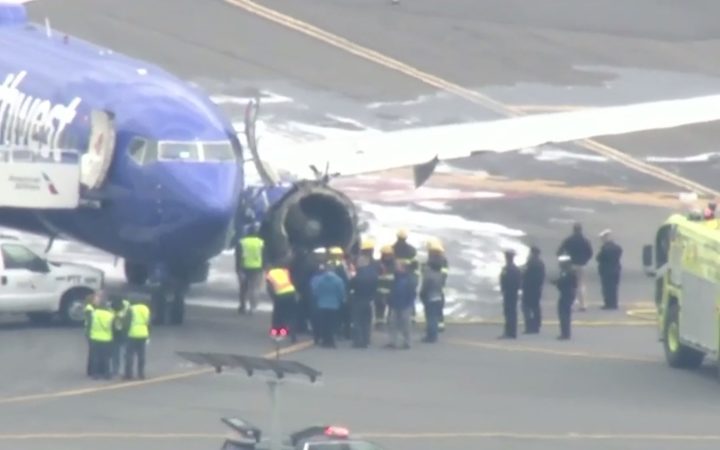 Southwest Airlines Flight 1380 made an emergency landing in Philadelphia after a window, wings and fuselage were damaged in the incident, officials say.

In an air traffic control recording, one of the pilots can be heard saying "there is a hole and someone went out".

The last passenger death on a US commercial flight was in 2009.

The Boeing 737-700 had been en route from New York's La Guardia airport to Dallas, Texas, with 143 passengers and five crew when the incident happened.

Witnesses say an engine on the plane's left side blew, smashing a window and causing cabin depressurisation that nearly sucked a woman out of the aircraft.

She was pulled back in by other passengers.

The dead woman was Jennifer Riordan, a mother-of-two and bank vice-president at Wells Fargo in Albuquerque, New Mexico, according to the Philadelphia Inquirer.

In the air traffic control recording released by NBC News, pilot Tammie Jo Shults is heard saying: "We have a part of the aircraft missing, so we're going to need to slow down a bit."

Asked if the plane is on fire, she says it is not but adds: "They said there is a hole and someone went out."

The US Federal Aviation Administration has opened an investigation.

The National Transportation Safety Board (NTSB) said they were aware of one fatality in the suspected "engine failure".

In a statement, Southwest Airlines said it was "devastated" and extended sympathy to all those affected by the "tragic event".

First responders "found a fuel leak and small fire in one of the engines", he said, adding that they used foam to extinguish the flames.

What a flight! Made it!! Still here!! #southwest #flight1380 pic.twitter.com/Cx2mqoXVzY

Images have been shared on social media showing passengers sitting in oxygen masks as the plane shudders around them.

"All of a sudden, we heard this loud bang, rattling..." said one passenger.

Photos have been shared on social media showing passengers sitting in oxygen masks as the plane shudders around them.

Timothy Bourman, a pastor from New York City, told The Inquirer and Daily News he had been sitting in the rear of the plane when he heard a loud boom.

@SouthwestAir These are the hero’s of SWA 1380 NYC to Dallas We lost an engine mid-flight and they guided back to Philly saved 149 on board pic.twitter.com/RNA8sXRBZA

"We were kind of out of control for a while. It seemed like the pilot was having a hard time controlling the plane. Honestly I think we just all thought we were going down."

When flight attendants told passengers to brace for impact, Mr Bourman said he and his wife worried for the worst.

If this ends up being the opening scene to Final Destination 13, I'm going to be really salty. #Flight1380 pic.twitter.com/feK7cPZS70

Passenger Marty Martinez posted a brief Facebook live with the caption: "Something is wrong with our plane! It appears we are going down! Emergency landing!! Southwest flight from NYC to Dallas!!"

After landing, he told CBS News that it felt like the plane was "free-falling", and added that he saw one injured woman being taken off the plane by rescuers.

"There was blood everywhere," he said.

"First there was an explosion and then almost immediately the oxygen masks came down and probably within a matter of 10 seconds the engine hit a window and busted it wide open."