President Donald Trump has warned Syria's government the US is "locked and loaded" to strike again if it carries out new chemical attacks. 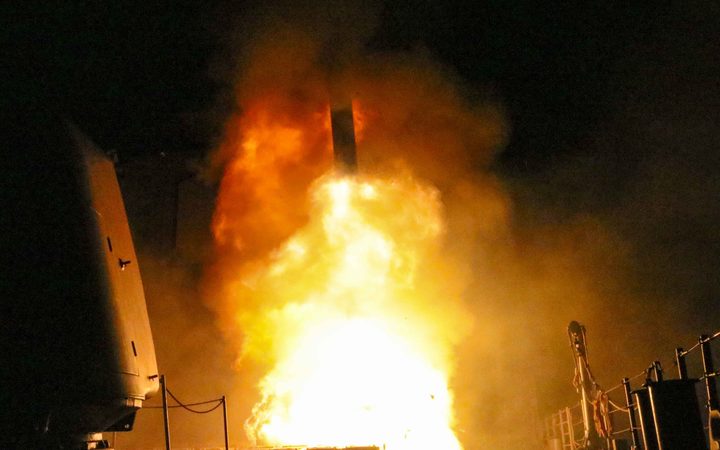 The warning came after the US, UK and France struck three Syrian sites in response to a suspected deadly chemical attack in the town of Douma a week ago.

Syria denies any chemical use and says that attack was fabricated by rebels.

The wave of strikes represents the most significant attack against President Bashar al-Assad's government by Western powers in seven years of Syria's civil war.

What has been the reaction to the strikes?

There was a bitter exchange at a UN Security Council emergency meeting today as Russia sought to secure a condemnation of the early morning air strikes by Western powers.

Russia's UN envoy, Vassily Nebenzia, read out a quote from President Vladimir Putin accusing the allies of "cynical disdain" in acting without waiting for the results of a chemical watchdog investigation into the Douma incident.

Inspectors from the Organisation for the Prohibition of Chemical Weapons (OPCW) are currently in Damascus and are expected to visit Douma this weekend.

Mr Nebenzia accused the US, UK and France of "hooliganism" and of "demonstrating a blatant disregard for international law".

US envoy Nikki Haley said the strikes were "justified, legitimate and proportionate".

She said: "I spoke to the president this morning and he said, 'if the Syrian regime uses this poisonous gas again, the United States is locked and loaded'."

Ms Haley said the US and its allies had given diplomacy "chance after chance" but Russia had continued to veto UN resolutions.

She said: "We cannot stand by and let Russia trash every international norm and allow use of chemical weapons to go unanswered."

Bashar Jaafari, Syria's envoy to the UN, said the US, UK and France were "liars, spoilers and hypocrites" who exploited the UN "to pursue your policy of interference and colonialism".

On the 15-member council only China and Bolivia voted in favour of Russia's resolution.

He tweeted, hailing the strikes as "perfectly executed". He also thanked the UK and France.

A perfectly executed strike last night. Thank you to France and the United Kingdom for their wisdom and the power of their fine Military. Could not have had a better result. Mission Accomplished!

His use of the phrase "Mission Accomplished" drew a warning from President George W Bush's ex-press secretary Ari Fleischer:

Um...I would have recommended ending this tweet with not those two words. https://t.co/h5Fl7kjea6

The phrase had been on a banner as Mr Bush declared the end of "major combat operations" in Iraq in May 2003, six weeks after the US-led invasion of the country. The following Iraqi insurgency questioned the validity of the statement.

Mr Trump had announced the strikes on TV, saying the three allies had "marshalled their righteous power against barbarism and brutality".

He spoke to Mrs May and French President Emmanuel Macron by telephone, agreeing the operation had been a success.

At a Pentagon briefing, Lt Gen Kenneth McKenzie listed the three targets that had been struck, saying the attacks had "set the Syrian chemical weapons programme back years":

Gen McKenzie said the "initial indications are that we accomplished the military objectives without interference from Syria".

He said "none of the aircraft or missiles were successfully engaged" by defence systems and all aircraft had returned.

Gen McKenzie said about 40 Syrian defence missiles were fired, mostly after the targets were hit.

The Pentagon briefing conflicted with information given at a Russian defence ministry briefing, which said 103 cruise missiles had been launched and 71 were shot down by Syrian systems.

Both the Russians and the US said there were no reported casualties. Syria says three people were hurt near Homs.

The US said it had communicated with Russia ahead of the strikes through the normal procedures of their "deconfliction" hotline but no details of the attacks were given.

There had been concerns that if the allied strikes had hit Russian military personnel, it would have further escalated tension.

The US says the scale of the strikes was about "double" what was launched in April 2017 after a chemical attack on the town of Khan Sheikhoun that killed more than 80 people.

The focus will be in Douma, and the visit by the OPCW inspectors. Syria said they were meeting officials in Damascus today and that a visit to the site of the alleged chemical attack was being facilitated.

The Syrian army also announced that the Eastern Ghouta region, where Douma is situated, had been cleared of the last rebel fighters and was fully retaken.

There were also unconfirmed reports of a large blast south of Aleppo on Saturday evening and other attacks on Syrian forces near Deir al-Zour, suggesting areas of the Syrian conflict are far from over.