Twelve people have been killed after a military airport in Syria came under missile attack, the country's state media reported. 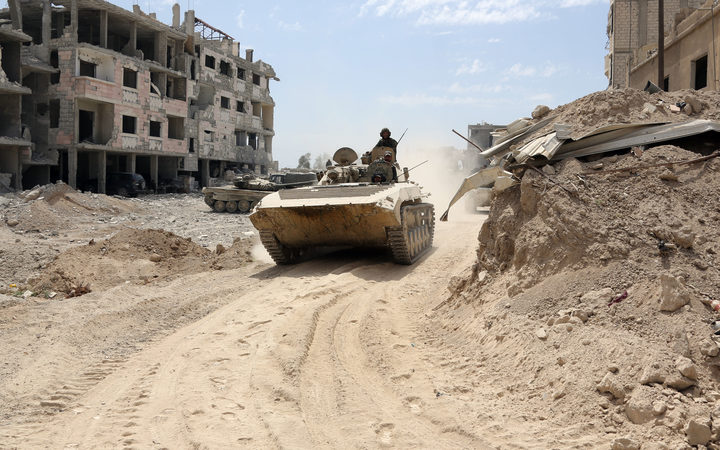 A picture taken on April 8, 2018, shows Syrian Army soldiers advancing in an area on the eastern outskirts of Douma. Photo: AFP

The reports come just hours after the US President Donald Trump warned the Assad regime it would pay the price for a suspected chemical attack in the rebel held area of Douma.

State news agency SANA said several missiles struck the Tayfur airbase, also known as T4, near the city of Homs in the early hours of Monday.

Details are still emerging and it is not clear who is responsible.

It follows international alarm over a suspected chemical attack on the rebel-held town of Douma.

US president Donald Trump branded Syria's President Assad an "animal", warning that he, along with allies Iran and Russia, had a "big price to pay".

But US officials have denied launching a missile attack.

"At this time, the Department of Defense is not conducting air strikes in Syria," the Pentagon said in a statement.

"However, we continue to closely watch the situation and support the ongoing diplomatic efforts to hold those who use chemical weapons, in Syria and otherwise, accountable."

Syria's state news agency initially called the reported missile strike on the Tayfur airfield a "suspected US attack," but later dropped the reference to the US.

In April 2017, the US fired 59 Tomahawk cruise missiles at Syria's Shayrat military airfield in response to a chemical weapons attack on a different rebel-held town, Khan Sheikhoun.