The legacy of Prof Stephen Hawking will live forever, mourners at the theoretical physicist's funeral heard. 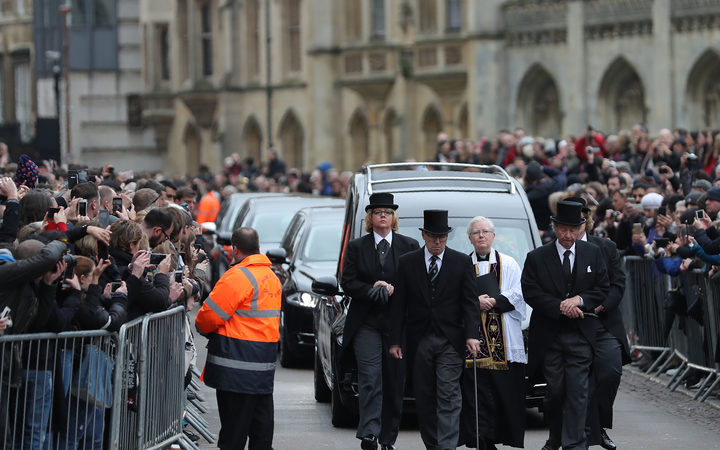 Prof Hawking, who had motor neurone disease, died on 14 March, aged 76, at his home in Cambridge.

Actor Eddie Redmayne was one of several speakers at a service at the university church, Great St Mary's.

As the funeral cortege arrived at the church, the bell rang out 76 times - once for each year of Prof Hawking's life.

His close family, including his three children Lucy, Robert and Tim, followed behind the hearse carrying the professor's coffin.

As it pulled up, the vehicle was met with applause from the hundreds gathered outside the church.

An arrangement of white lilies, to represent the universe, and another of white roses representing the polar star was placed on top of his coffin.

It was carried into the church by six porters from Gonville and Caius College, where Prof Hawking was a fellow for more than 50 years.

The porters, who often assisted him when he visited the college for formal dinners, were asked to be pallbearers by the professor's family.

Up to 500 invited family, friends and colleagues attended the private service.

Among those inside the church was Eddie Redmayne, who played the role of the professor in the 2014 biographical drama The Theory of Everything.

He read from Ecclesiastes 3.1-11, while eulogies were delivered by Robert Hawking and Prof Dowker.

The service was officiated by the Reverend Dr Cally Hammond, Dean of Gonville and Caius College.

During the service the choir of Gonville and Caius performed the choral work Beyond the Night Sky, which was originally composed as a gift to Prof Hawking for his 75th birthday party at the college last year.

Other guests seen arriving at the service were Queen guitarist Brian May and actress Anita Dobson, and television presenter and comedian Dara O Briain.

Entrepreneur Elon Musk and playwright Alan Bennett had also been on the guest list.