The first non-stop flight between Australia and the UK has arrived in London.

The historic flight, carrying more than 200 passengers and 16 crew, departed from Perth at 6.49pm local time on Saturday and is due at London Heathrow at 5.10am UK time on Sunday. 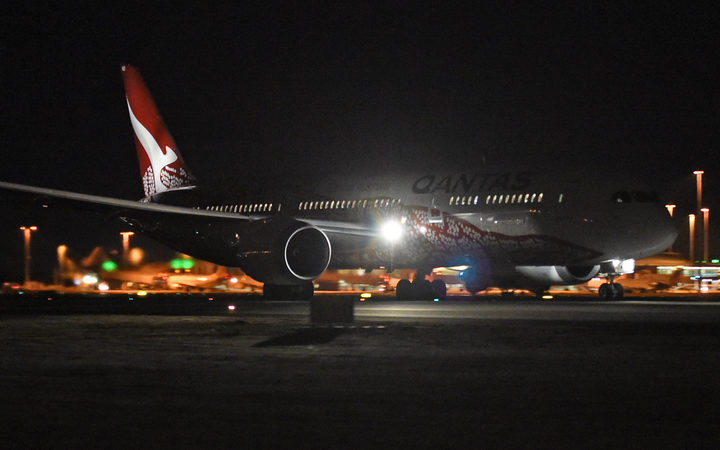 Qantas' 787 Dreamliner takes off on its inaugural flight from Perth to London. Photo: AFP

Qantas Flight QF9 should complete its 14,498km journey in just over 17 hours.

The airline is using the Boeing 787-9 Dreamliner, which is twice as fuel-efficient as the Boeing 747.

It is part of ambitious plans by Qantas to add ultra long-haul flights to its schedules.

A momentous occasion on the flight deck of #QF9#QantasDreamliner pic.twitter.com/dRTh79ZxUb

Speaking at an event ahead of the inaugural flight, he said the earliest Qantas flights between Australia and the UK - known as the "kangaroo route" - had taken four days and involved seven stops.

Western Australia's state government is also hoping to see an increase in tourist numbers as a result of the new direct route.

The historic flight, carrying more than 200 passengers and 16 crew, departed from Perth at 18:49 local time on Saturday and is due at London Heathrow at 05:10 on Sunday.

To minimise the discomfort of such a long flight, the plane has been equipped with improved air quality and lower cabin noise.

Some of the passengers have agreed to share data on their sleeping and activity patterns with researchers from the University of Sydney.

The flight will be the world's second-longest after Qatar Airways' route from Doha to Auckland, which spans 14,529km, according to the International Air Transport Association.

Other carriers, including Emirates and United Airlines, have also flown non-stop journeys greater than 14,000km.